WEBSTER, N.Y. (WHEC) — A predicate felon is facing charges after a chase that started in Irondequoit and came to end in Webster Thursday morning.

It all started at around 9:30 a.m. when Irondequoit Police Chief Alan Laird says an officer spotted a car that was reported stolen from the city of Rochester.

Laird said the suspect was also wanted on a number of other burglary and grand larceny-related charges.

A car chase started and later ended outside a home on Bay Road near Route 104. Laird said the suspect then ran away from the car, and soon a manhunt started. 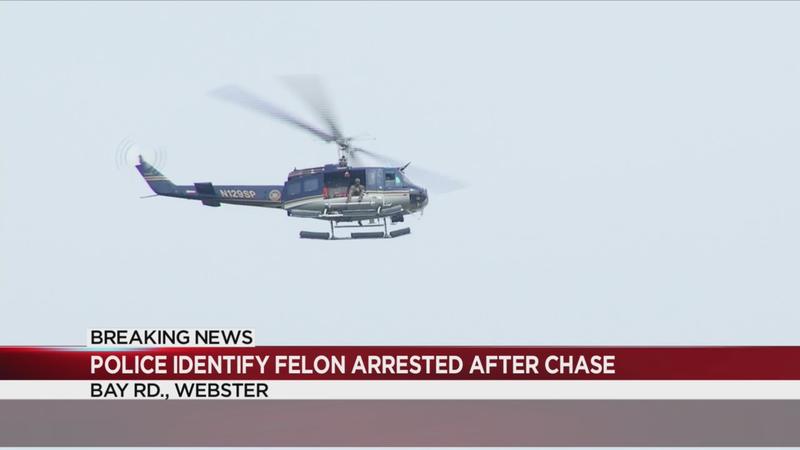 The suspect was found in the area around 11 a.m. Laird said he was heading towards Irondequoit Bay but could not say if he reached the water. Multiple agencies, including Irondequoit Police, Webster Police, State Police, and the Monroe County Sheriff’s Office helped in the search.

Laird said Harloff is a predicate felon and was remanded to the Monroe County Jail without bail.

Officers had Bay between Empire Boulevard, Glenn Edith Drive, and Rt. 104, as well as the right eastbound lane of Rt.104, closed off. A State Police helicopter was also used in the search.

Neighbors told a News10NBC crew on the scene they were told a "semi-unsafe" person was on foot. They were not allowed to drive to their homes.

"Obviously, very relieved because we live so close and not really knowing for sure where the person was, she wanted to go home and lock her doors and I said, I was too scared. I just came back here," neighbor Dolly Kujawa said. "I checked every bush on the way."

Closed due to police activity in #Webster on Bay Rd Both NB/SB at Rdg Rd/Glen Edyth Dr and before Hwy 104 #traffic https://t.co/0wsFrmqFZG