BROCKPORT, N.Y. (WHEC) — Protesters rallied at SUNY Brockport Thursday evening over the decision to host a man who was convicted of murdering two New York City police officers in 1971 for a speaking engagement next month.

Jalil Muntaquim, also known as Anthony Bottom, is scheduled to speak on April 6. He was originally going to be paid using money from the college’s "Promoting Excellence in Diversity Grant", but the college announced it was rescinding the grant amid controversy over Muntaquim’s past and the decision to promote the event by calling Muntaquim a "political prisoner".

That wording has drawn criticism from politicians on both sides of the aisle as well as the law enforcement community.

The group of protesters told News10NBC they are there to show support for the families of the two NYPD Officers that Muntaquim killed, Waverly Jones and Joseph Piagentini.

"We’re just here to make a statement to say we don’t care for it, we don’t think it’s right," Charles Defrank said. "We don’t believe he was a political prisoner. I think the narrative is being twisted around." 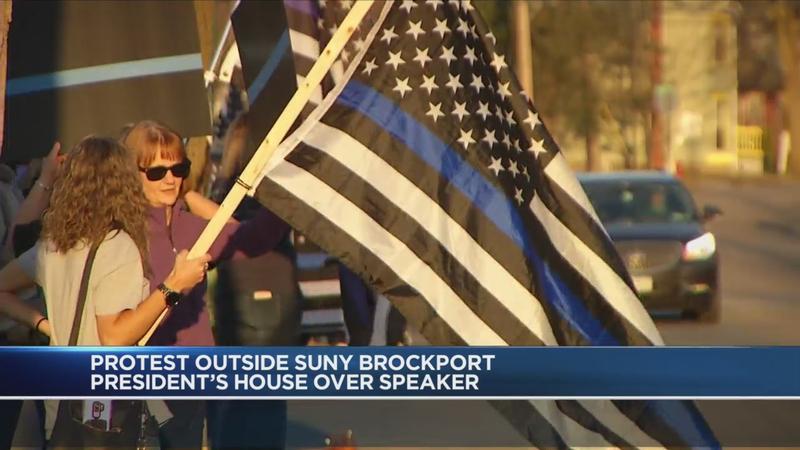 "To have educational institutions put fuel to the fire after we buried two police officers?" Slagana Mitris said. "And those are not the only two. Where are we going with this?"

They lined Holley Street, which is where SUNY Brockport President Heidi Macpherson’s home, as well as several campus buildings, are located, with "Thin Blue Line" flags.