BROCKPORT, N.Y. (WHEC) — SUNY Brockport Wednesday canceled all in-person classes and extracurricular activities after 5 p.m. "out of an abundance of caution" as the campus prepared for a controversial speaker at 6:30 p.m.

His speaking engagement brought with it protests from the law enforcement community and its supporters and calls from politicians on both sides of the aisle to pull the "Promoting Excellence in Diversity Grant" funding that would have paid Muntaqim for the event. The college then moved the event to an entirely virtual format.

News10NBC’s crews spotted a group of police, with their dogs, working their way around the college union Wednesday evening. 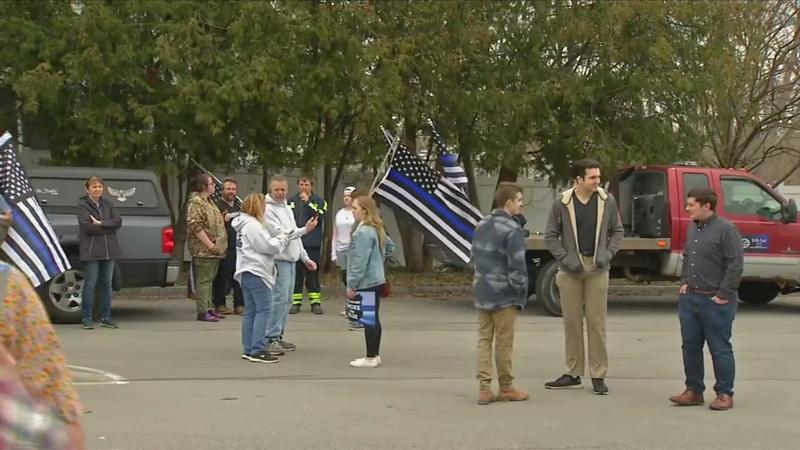 His speech is titled "History of Black Resistance, US Political Prisoners and Genocide".

Some of the students News10NBC spoke with said they wished they would hear more from the school.

"I just think that there’s a lot of people that are, and the school’s been, kind of, purposely not saying anything regarding it," said Connor O’Keefe. "They’ve been kind of coy over the stance on it, so I think that’s why a lot of people are upset because they haven’t really come out and said ‘We agree’ or disagree."

Alex Laure added, "To me, I look at everything as a learning opportunity. You can learn a lot from someone’s life, stuff they did. But, the protests… It’s hard to tell. It’s hard to know. Honestly, it’s hard to tell. Everyone’s got their own story and what they believe in, so…"

Much of the outrage over the event has stemmed from the event’s description of Muntaqim as a "political prisoner". SUNY Brockport did not change the description of the event, but after the controversy, it did add a disclaimer that that description of him is not reflective of the college’s beliefs.

Some protesters say they came from as far as Buffalo. They told News10NBC Reporter Patrick Moussignac that they believe the speech is being held for the wrong reasons.

Muntaquim spoke for about two hours. Both the "Thin Blue Line" and "Black Lives Matter" protests ended peacefully after the speaking event ended.