ROCHESTER, N.Y. (WHEC) — Police deployed several measures including tear gas and pepper balls against demonstrators on Saturday night after police say the group refused to disperse and threw bottles, rocks, and fireworks at them.

The march came on the fourth night of protests over the death of Daniel Prude and the long delay between his death in March and the release of information and body camera video of the incident preceding it.

Beginning on Jefferson Avenue near the site of Prude’s encounter with police, the crowd of at least 1,500 walked its way towards downtown, stopping at City Hall. There, organizers renewed their calls for the resignation of Mayor Lovely Warren and Rochester Police Chief La’Ron Singletary. The crowd, including several on bicycles, moved through the city often while singing or chanting.

Around 10:20 p.m., police say, the group arrived at the corner of Exchange and Broad, near the Blue Cross Arena. Police then declared the march an unlawful assembly after they claim bottles were thrown at officers. The situation continued to escalate until 10:26 p.m. when officers then deployed pepper balls and tear gas into the crowd.

Our crews on the scene report seeing several injuries to demonstrators. 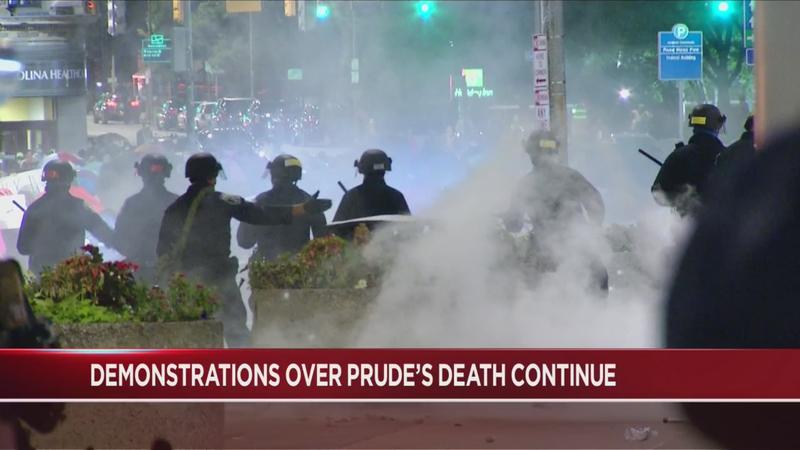 Police say around 12 a.m. the bulk of the protesters left the area of downtown, leaving 50 to 100 protestors who continued to throw objects at officers from various locations near City Hall ad State Street. Officers say they advanced to City Hall as agitators were breaking windows at the building.

Around 12:50 a.m. the majority of the protesters had left the area.

Stay tuned to News10NBC online and on-the-air for more information as it becomes available.