ROCHESTER, N.Y. (WHEC) — The grand jury in the Daniel Prude case voted 15 to 5 not to indict the Rochester Police officers targeted in the case.

In March 2020, Prude stopped breathing in Rochester Police custody and died a week later when he was taken off life support at Strong Hospital.

The testimony started in October and the first witness was Daniel Prude’s brother, Joe Prude.

Starting the evening of March 22 Joe Prude called 911 twice for help with his brother.

READ MORE: TIMELINE: Daniel Prude was in Rochester for less than 15 hours 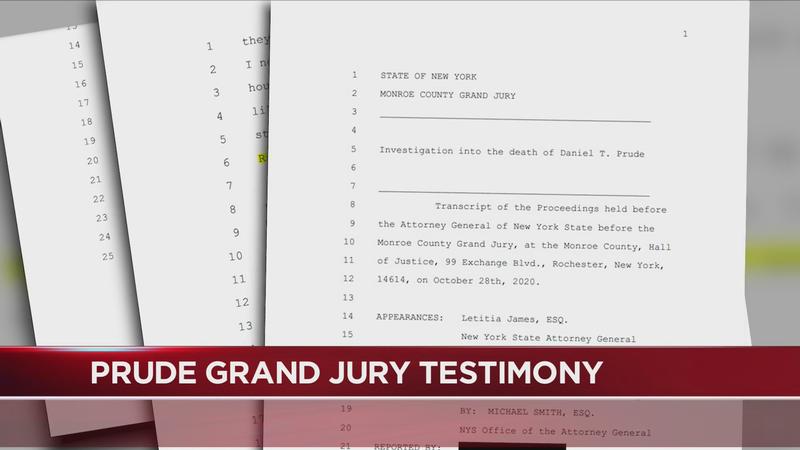 On March 23, Daniel ended up naked, handcuffed and pinned by police on Jefferson Avenue.

Joe Prude testified "Right then and there, I knew they killed my brother."

The grand jury heard testimony in nine sessions, from October to February.

The transcripts show the jurors asked a lot of questions ranging from Daniel Prude’s criminal history to the charges they were considering.

On Feb. 23, 2021 state Attorney General Tish James came to Rochester and said the police would not be charged.

"We presented the strongest case possible," James said. "But today the grand jury decided not to indict any police officer on charges related to Daniel Prude’s death."

What is one possible reason the grand jury vote not to indict the officers?

One of the state’s experts told the jurors he didn’t think the police were responsible for Daniel’s death.

Just before Christmas, the state attorney general called an expert in police custody deaths to testify at the grand jury which was targeting the officers. All names in the transcript are redacted.

The expert told the jurors Daniel Prude’s death was consistent with "sudden cardiac arrest." He testified it was his opinion that "none of the officers, their impact, individually or collectively, would have caused or contributed to that cardiac arrest."

He went on to say it would have been more dangerous for Prude if the police let him get up and run around.

In February, just before their vote, the jurors asked the prosecutors a lot of questions.

Juror: "If you decide that the police were justified in hands-on restraining him, then the rest is out the window, is that a hundred percent accurate?"

Prosecutor: "Yes. That is a hundred percent accurate."

During testimony in December, the jury heard from the officer who pinned Prude’s head to the ground.

He told the jurors at one point Prude was "actually trying to bite my fingers. He began spitting."

The officer said moments later "I have little to no downward pressure on Mr. Prude’s head at all."

Then, he told the jury for the first time "no resistive tension at all."

That officer told the jury it’s not his job to get into a person’s psyche or figure out what drugs they might be on. He told them his job is to calm people down, get them in an ambulance and to the hospital.

You can read the officer’s testimony by selecting Session 7, that’s December, and start at page 68.

That officer and six others are still on administrative leave waiting on an internal affairs decision by RPD.