Editor’s Note: The puppy that was in the stolen car Saturday night has been returned to its owner. Eric Berg says he just retrieved "Benny" Monday evening. Berg says someone returned the puppy and collected the $2,000 reward.

Berg says RPD was also given a tip on the stolen car which remains missing at this time.

ROCHESTER, N.Y. (WHEC) — Eric Berg, who lives in Rochester, says he’s desperate to get his dog back after his car was stolen Saturday night with the puppy inside. The incident was caught on video by security cameras inside Masons on Alexander Street. 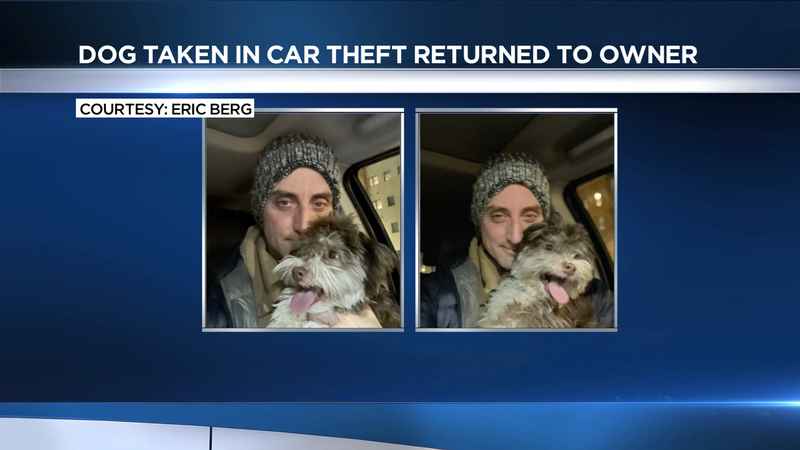 In the video, you see Berg walking down the sidewalk to get takeout from ThaiYada around 6:30 p.m. Saturday night. Moments later, you see him running out and leaping over a snowbank into the middle of the road to try and stop the car thieves. His main concern is his 6-month-old puppy, Benny, who was in the car.

"I don’t want to get anyone in trouble, honestly I don’t care what happens to my car, I just want to pretend this never happened and just get my dog back,” Berg said, in tears. “I was out of the car for less than a minute. I pulled right up on the curb, in front of the restaurant like I’ve done before and I wanted to keep him warm, so I left him in the car and I had my lights on.

Berg describes the moments leading up the dognapping.

"I stepped in there and grabbed my food and when walked out, I saw my car pulling off the side of the curb. I thought it was a nightmare. I jumped into the middle of the road, and it swerved around me and sped off,” Berg described.

Berg says he saw two people jump into his parked SUV, and a witness driving by also tried to chase after it.

“She returned a few minutes later with no information. I called police,” Berg said.

The missing 6-month old puppy’s name is Benny. He’s brown and white with shaggy hair. Berg says he’ll do anything to get him back safely.

“I just wonder if they regret it at this point, too…if they’re wondering how to get out of this. It’s a $2,000 reward, no questions asked. If they’re trying to sell my dog, I’ll give them more,” Berg added. "I’m in a panic and utter shock that my dog was stolen.”

Berg says this is a life lesson he’ll only have to learn once.

"I realize that this was a crime of opportunity for these individuals that they saw my car running and clearly, I regret that,” Berg said.

The Rochester Police Department is investigating. Other local businesses along this street have reached out and offered their camera video. Anyone with information is asked to call police.

Police say they’re looking for the car, but more importantly, the dog. Anyone with information is asked to call the police. Berg says people can contact him as well at 585-210-3167 or they can email pleasereturnbenny@gmail.com.