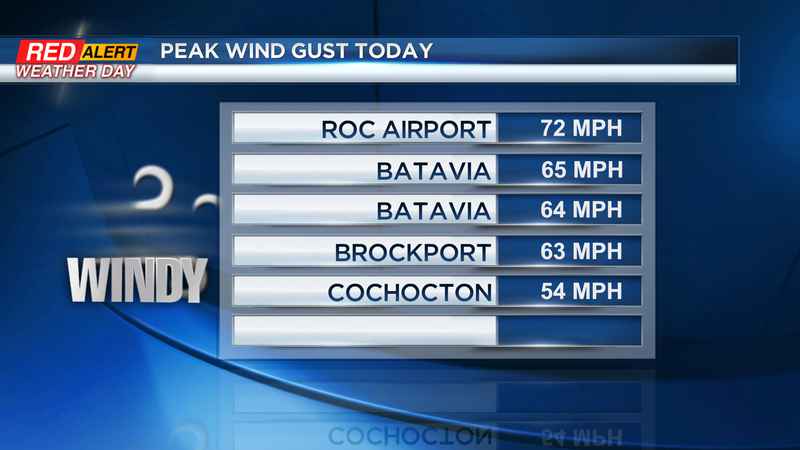 ROCHESTER, N.Y. (WHEC) — This season our weather has gone from one extreme to another for Western New Yorkers, and today we paid the price with downed trees and power lines.

A howling wind produced wind gusts between 55 to 65 miles per hour mainly during Sunday afternoon. The highest wind speed was recorded at the Rochester Airport with an anemometer reading of 72 miles per hour at 1:21 PM this Sunday afternoon. This wind gust was the seventh highest in recorded history for Rochester and the highest wind speed since 81 miles per hour was recorded on March 8, 2017. There were dozens of reports of tree and power line damage with the greatest concentration for Monroe, Orleans, Wayne and Genesee Counties.

In addition, we broke a long-standing high-temperature record for this date. The old record was 70 degrees set back in 1894. This 128-year-old record has been around since Grover Cleveland was President of the United States. Unofficially, the high-temperature today was 73 degrees and the last time we got this warm in Rochester was over four months ago.

The News10NBC red alert day will continue into this early Sunday evening as wind gusts are still expected to be near 45 miles per hour. However, winds will diminish rapidly this evening with much calmer weather expected after midnight. Watch for the rain to arrive towards Monday morning. The start of the week will feature less wind, but much colder temperatures for Monday and Tuesday.

Stay tuned to News10NBC for the latest update on the forecast.