Remembering 9/11 and one local EMT’s sacrifice

ROCHESTER, N.Y. (WHEC) — Twenty years ago, a University of Rochester graduate ran to help those who were injured in the 9/11 attacks at the World Trade Center. He lost his life trying to save others.

His friends and mentors are working to ensure we will never forget Zack Zeng’s name or sacrifice.

Zeng was a student at the University of Rochester in the mid-’90s when his father died. Feeling depressed and far from his mom and brother in New York City, he called home looking for guidance.

"His mother said ‘Go do something for your community,’" said Michael Pollock with Brighton Volunteer Ambulance.

So Zeng decided to join Brighton Volunteer Ambulance and he worked his way up to EMT. 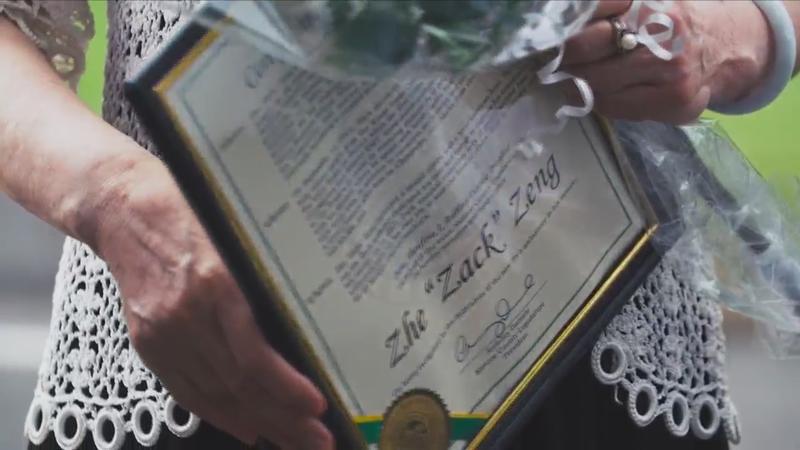 "Even after he got his undergraduate he went onto the Simmons School for his MBA he stayed a member here in Brighton," Pollock said.

He helped to save and better lives locally until he eventually moved back home to New York City. Zeng worked at a bank three blocks away from the World Trade Center.

"Zack took the train to work got off the train and when he was walking to the bank, it’s when the first plane hit," Pollock said.

His co-workers at the bank vividly remember what happened next.

"He ran into the bank building grabbed all the first aid kits he could and carried it all to Ground Zero and he began helping," Pollock said.

Pollock said he was not surprised that Zeng ran toward the danger instead of away from it.

"He knew that was a mission and the mission was to save lives," Pollock said.

No one asked Zeng to go. He wasn’t even volunteering at an agency at the time, but he was an EMT, trained here in Brighton, who saw a disaster in front of him and wanted to help.

"We have video of Zeng actually treating a patient there on the ground in front of the South Tower," Pollock said.

That video is the last image of Zeng.

His remains were confirmed through DNA months later. His former friends and colleagues in Brighton were devastated.

"We are the ones that will do anything within our power to save a life and to lose one that’s been trying to do that it’s heartbreaking, it’s absolutely heartbreaking," Pollock said.

Over the last 20 years, they’ve done a lot to honor Zeng’s memory and sacrifice. They’ve named rigs after him, they’ve convinced the state to add his name to official memorials and they’ve kept in close contact with his family. Because clearly, right until the very end, Zeng held his mother’s words to him during that call while he was here in Rochester, very close.

"Go do something for your community."

We will never forget that’s what he died doing.