Remembering 9/11: Why the number 9 jersey is an honor at Pittsford Mendon

PITTSFORD, N.Y. (WHEC) — A soccer jersey has been a living memory for Pittsford Mendon High School. It honors 1985 grad, Todd Pelino who died during the attack on 9/11. Each year a senior player is chosen to wear number 9, carrying on Pelino’s legacy.

Santowski took the field this season with a jersey that carries more than just a number.

"It’s nice to be recognized by not only your peers but also someone who embodies those characteristics that Todd Pelino exemplified back when he played.” 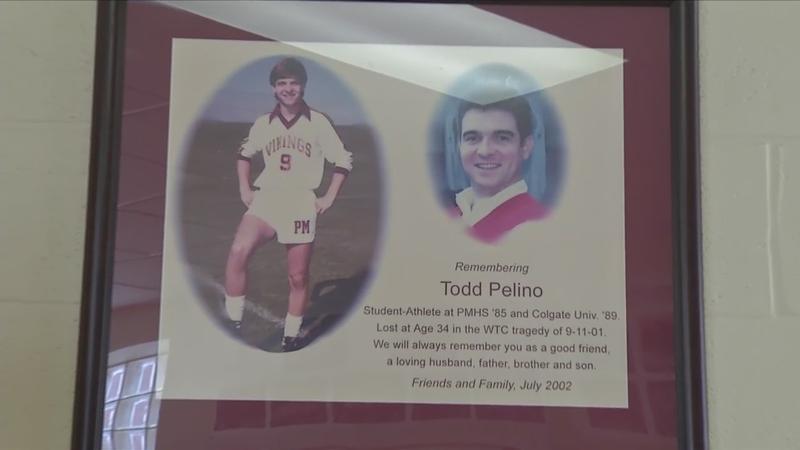 "It was a unanimous vote for John this year, that he embodies everything that Todd stood for, which is that ideal teammate, the guy you would pick first to be on your team, not just because of his ability but because of his character,” Mark Hurley said, the boys soccer head coach for Pittsford Mendon high school.

Pelino was working for a financial services firm on the 102nd floor of the world trade center on 9/11 when he lost his life at age 34. Pelino is described as humble, and encouraging to everyone. Those same qualities in Santowski made him the perfect pick.

Along with keeping positivity on and off the field, Hurley says John was picked because of other factors too. On top of playing soccer, Santowski is also on the wrestling and lacrosse team all while holding a place on high honor roll in academics.

September 11th is a painful memory for many. Santowski says you can’t change the past but you can honor it and try to make a difference.

"With the upcoming 20th anniversary of 9-11 I think it’s important to remember how to be a good person, I think that’s what would make a difference in this world and I think that this number 9 jersey embodies above being a good soccer player being a great person and a great teammate.”