While his resignation is effective Tuesday, May 10, 2022, his statement said his office will continue to serve the people of New York’s 23rd District through the end of the year or until a new representative is elected and sworn in.

Reed will join Charlie Black at the Prime Policy Group, in Washington, DC.

Reed was accused of sexual misconduct back in March of 2021. His accuser, Nicolette Davis, told The Washington Post that Reed put his hand on her back at a Minneapolis pub after a day of ice fishing in 2017. Davis claimed he was drunk, rubbing her back, and that at one point, he unhooked her bra and moved his hand to her thigh.

He apologized for his actions and announced he would not seek public office in 2022 shortly after the allegations were made, saying that at the time, he was "powerless over alcohol", and that since then, he has spent nearly four years working on a "personal lifelong journey of recovery". 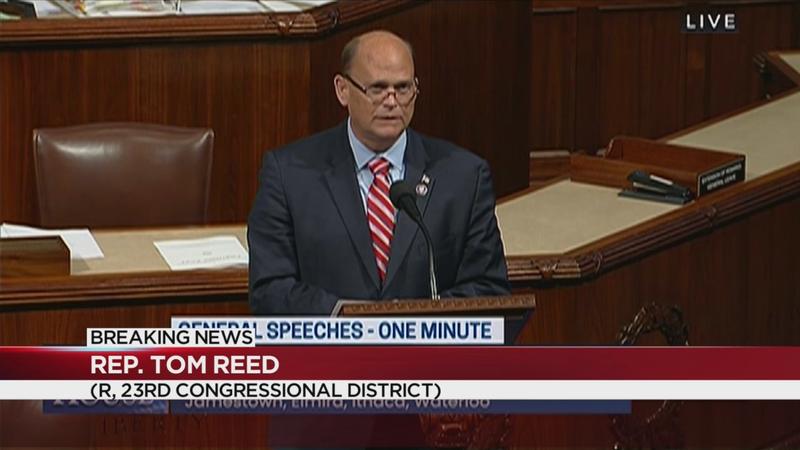 His district encompasses Southern Tier counties that border Pennsylvania, as well as part of the Rochester area, including Seneca, Steuben, Yates, and parts of Ontario County.

On the House floor Tuesday, Reed made the following remarks:

After almost 12 years in Congress, today is my last day. It has been an honor to serve with you all from both parties. I love this institution as it still exemplifies what is best about our government, we are the People’s house. While I am proud that we put people before politics, there is much more to do. I am leaving to continue that work and hope to have a greater impact on our Country.

I believe the current focus on extremism demands us to heed the words of Abraham Lincoln uttered years ago as we face a similar threat to our existence today— “a house divided cannot stand!” But I add— “a house United will not fail.” It is time for petty political posturing to end. Leadership must emerge And in God I trust. His divine protection will extend again if only we acknowledge and accept His love and the divine spark that exists in each of us as citizens of our great nation.

I want to thank my family, who without their love and support I am nothing. I also thank the people who have worked for us and helped so many. I am grateful.

My most profound appreciation is for the people of Western New York. Thank you for giving a country lawyer, the youngest of twelve, raised by a single mother whose father passed away when he was only two, the honor of representing you at the highest level. Only in America can such a dream come true.

So, I humbly bid farewell and submit my resignation as a Member of the House. I wish you all — Godspeed!

Those who live in New York’s 23rd Congressional District will be able to vote in the primary elections, were scheduled for June 28, 2022, but were pushed back to August due to a legal battle over the constitutionality of the Democrat-drawn redistricting maps, the district boundaries that candidates are campaigning in could change.