Republican candidates for governor face off at Kodak Center

ROCHESTER, N.Y. (WHEC) – Tonight, the four Republican candidates looking to snag the nomination for governor faced off at the Kodak Center in Rochester Tuesday night.

It was a full house at Kodak Center as Newsmax hosted the republican governor candidate debate here in Rochester, trying to unseat Governor Kathy Hochul.

This debate was the first with a live crowd and the night started with asking all candidates what their qualifications were.

Rob Astorino: "I’m qualified because I did it in Westchester County, which is 3 to 1 Democrat, home of the Clintons and George Soros, this staunch conservative got elected twice" 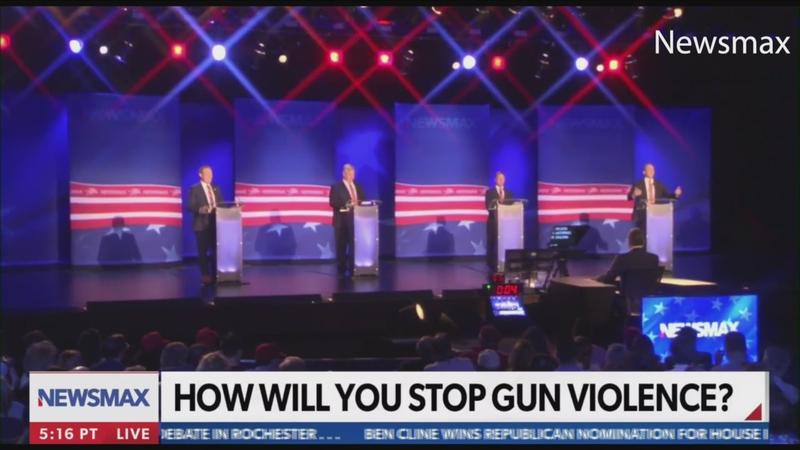 Andrew Giuliani: "I’m very honored to have served the last four years of my time in the Trump White House, working on important issues like the Paycheck Protection Program. Eric, like you know very well, like the opioid task force and like making sure that 911’S health fund got refunded the money that had been taken out of over the previous administrations."

Harry Wilson: "I’m a businessman, not a politician. I’ve spent nearly 30 years the highest levels of American business fixing broken companies. I think that is exactly the skill set we need to fix the most broken state government in the country. In my turnaround plan, we will cut income taxes 20%. We’ll cut property taxes 20%. We’ll engage in regulatory reform to reduce the cost of living for families across the state."

Harry Wilson: "I am pro-choice. I don’t agree with Gov. Hochuls’ comments. I think they’re totally off base. It’s okay. It’s okay. We did we’re not going to agree on everything. And I apologize for that."

Andrew Giuliani: "The fact that we have a governor that immediately wants to go after our Second Amendment and by the way, are our First Amendment rights as well as the reaction to this book. The other candidates on the stage have alluded to this. We need to make sure that we fully fund our police."

And some heated moments with jabs at Zeldin over some answers and for his role in voting for former governor Andrew Cuomo’s budget.

At the very end of this debate all candidates were asked if they don’t win the Republican primary will they endorse the winner?

All men said they would.

The primary will be on Tuesday, June 28. Stay tuned to News10NBC for more information.