ROCHESTER, N.Y. (WHEC) — Crime is taking over. That’s the claim from local law enforcement leaders, and they say a new state law, the "Less is More" Act is to blame.

A group of Republican state lawmakers, local law enforcement and victims’ advocates held a press conference Wednesday. They say the "Less is More" Act is reckless and will have an impact on you and your family’s safety.

In case you’re not familiar, this new law was signed by Gov. Kathy Hochul on Friday, Sept. 17, 2021. Under the law, parolees can no longer be held in jail for technical violations like missing curfew or testing positive for drugs. Dozens of inmates have already been released from the Monroe County Jail.

Local law enforcement leaders said the law is pro-criminal, and law-abiding citizens will pay the price.

Gates Police Chief Jim VanBrederode spoke at the press conference. He’s the President of the Monroe County Chiefs Association. He says career criminals are being released from jail into our communities. 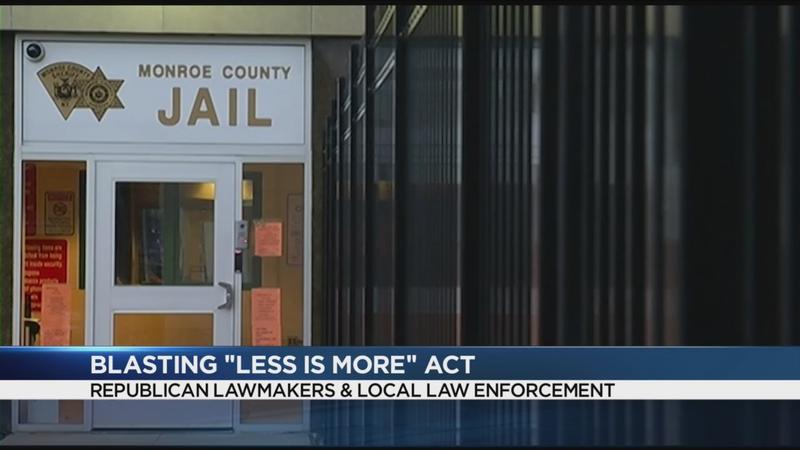 "These are the ones that we fear at nighttime, okay? These are the ones our community should be scared about because the odds of them re-offending are very good and now we have no recourse if they violate until they commit another crime, a felony," VanBrederode said.

On the other side, proponents of the law say it gives parolees a better chance of staying out of prison and creates incentives for those who follow the rules.

Monroe County Legislator Rachel Barnhart says 15% of people in the Monroe County Jail are there for technical parole violations and says that’s costing the public nearly $12.5 million a year.

Barnhart said New York State has been incarcerating more people for non-criminal technical violations of parole than any other state, at a rate of six times the national average. Outside of New York City, she says Monroe County has been the worst offender for this.

The post from last Friday lists the names of 29 people who were released from the Monroe County Jail due to the "Less is More" Act along with the crime that originally landed them in state prison.

Barnhart said the post gives the impression those parolees were released from jail immediately after those crimes, not for violating their parole.

The group also wants an apology from Sheriff Baxter. News10NBC reached out to the MCSO for comment, but we have not heard back yet.

Meantime, Senate Republican Leader Rob Ortt along with other state republicans are hoping their voices will be heard in Albany. However, Governor Hochul continues her jail reform. Click here to learn more about the "Less is More" Act.