Residents give their input in RPD’s chief search

ROCHESTER, N.Y. (WHEC) — Rochesterians are asking for their next police chief to deal with some familiar issues.

On Wednesday night, the city held its first virtual meeting to get input from the public as it looks for a new chief and many of the questions that came up have been challenging Rochester police for years.

"A chief should come with experience in violence reduction,” said participant Judy Hay.

To lead the department, the city has brought in Gary Peterson’s search and recruitment firm which is asking what Rochesterians are looking for in a new chief, which brought broad ideas. 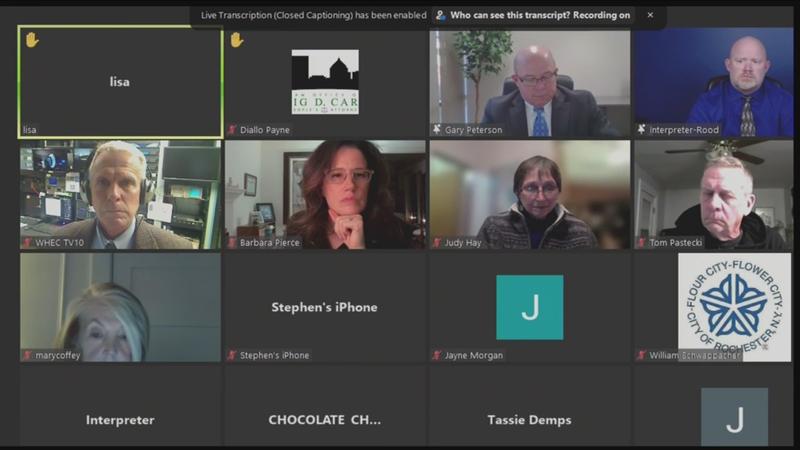 "Have the ability to move the culture to a more progressive stance,” explained participant Ted Benedict.

"A Chief who is not afraid To go out and walk the streets with some of the officers,” added Hay.

The exchange also brought up some very specific issues.

"Any candidate that isn’t forcefully advocating for the repeal of the bail reform law should not be considered,” declared participant “Chris.”

One recurring theme, in conversation and in questions texted into the Zoom chat, was how long the chief, any chief, will stick around to make changes and stay the course on any progress.

"We don’t need a careerist, who comes in, who parachutes in and then is out in three or four years, onto greener pastures,” said Chris, “Which seems to be a common thread.”

Another common request: Find someone local, or at least someone for whom the transition and learning curve in Rochester wouldn’t be too steep.

“I would like the chief to have relevant previous experience in a city similar to Rochester,” said Benedict. “And we know there are a number of those these kinds of cities around America.”

Rochester is planning to hold a total of four of these online meetings, each meant to accommodate people in different parts of the city:

All are scheduled for 6 p.m. via Zoom. Registration is not required. The Zoom links will be available online. The city says those who can not make their quadrant’s scheduled meeting are allowed to attend another one’s.