ROCHESTER, N.Y. (WHEC) — The Rochester Fire Department responded to West Main Street around 2:20 a.m. Sunday for the report of a mini-mart on fire. The first arriving companies confirmed a fire in a mini-mart in a large two-story-flat roof apartment building.

Firefighters say Engine 13 quickly advanced a hose line into the mini-mart to extinguish the fire. Crews went to the second floor to check for extensions and search for anyone still in the apartments. Crews on the second floor found fire in an apartment and the fire had extended to a void space between the ceiling and the roof.

Firefighters said because of the size of the building, the extent of fire on the roof, extreme cold weather conditions and the need for more resources, second, third and fourth alarms were called to the scene.

Firefighters say crews were deployed to every apartment on the second floor to pull down and open up ceiling and cockloft areas to check for fire extension and extinguish the fire. While on the roof the condition of the roof deck became too dangerous for them to stay and the firefighters were removed.

Multiple hose lines were in operation to help extinguish the fire. Crews also gained entry to a exposure building to check for fire extension and found no fire advancement to that building. Because of the extremely cold weather conditions, crews had to be rotated in and out of rehab to warm themselves. 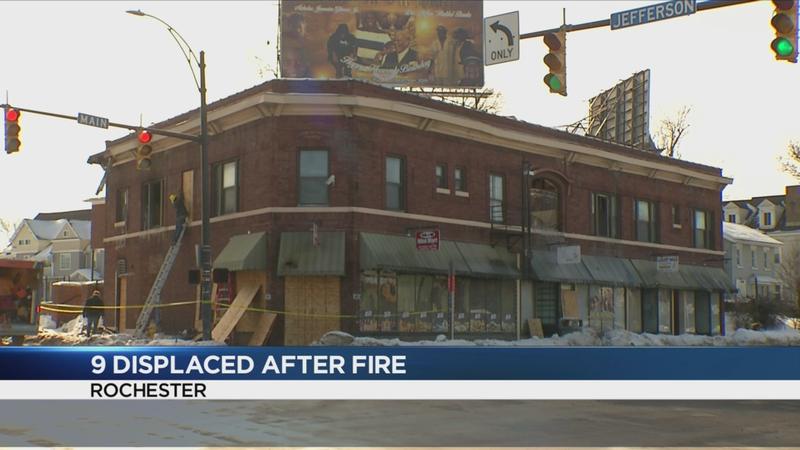 Red Cross responded to the scene and is aiding; 6 adults and 3 children from five total apartments effected by the fire.

One firefighter was injured and was transported to Strong Hospital to be evaluated for their injuries. No other injuries were reported.

The RFD would like to remind everyone to make sure their smoke alarms are in working condition and test them on a monthly basis.

If any city resident does not have a working Smoke Alarm or Carbon Monoxide Alarm, they should call 311, and the RFD will respond to install one for them.

The RFD also says when the Smoke Alarm goes off and you do have smoke and or fire in their house, to get out, stay out and call police.