ROCHESTER, N.Y. (WHEC) — A dark figure is swooping in to the help Rochester area homeless. The man who calls himself "Batman of San Jose" is out on the city’s streets. Rochester may not be Gotham City, but that doesn’t stop this Batman from doing what he can to save someone’s day.

The masked helper spelled out his mission to News10NBC’s Stephanie Duprey.

"Hopefully, seeing some dude walking around with a Batman costume on helps people out,” Batman of San Jose said.

If you’ve seen a black figure with a cape roaming the city streets, have no fear, Batman is here. We walked the streets of Rochester with Batman and he explains his mindset while dropping off items like a blanket to an area where he’s seen people sleeping.

"Just dropping some stuff off, I’m not sure if the person who stays here is coming back but I’ve seen them recently. I just want to make sure they can stay warm,” Batman said, placing a blanket and some water down on the ground. 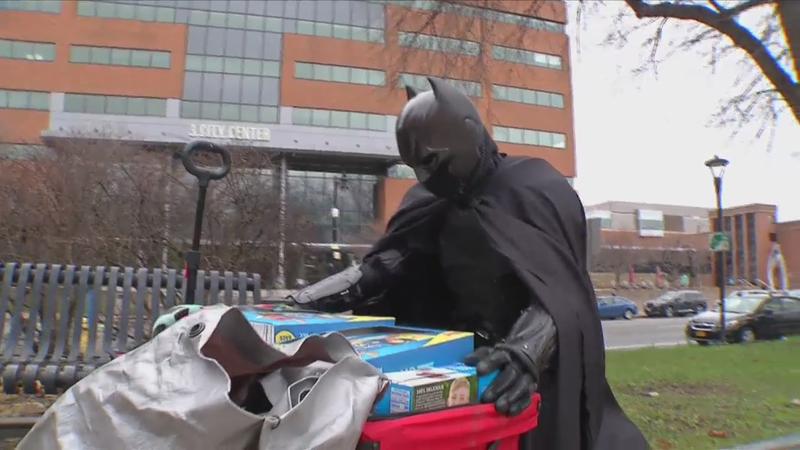 Keeping his identity private, the "Batman of San Jose" did tell us, he’s a Rochester Institute of Technology student. He says he started helping the homeless community four years ago in California. That’s where his bat signal lit up for the first time.

"The cape, pointy ears, it’s hard to miss. I wanted to use this to draw people’s attention to the issue of homelessness. Seeing people but not really seeing people.”

The caped crusader may not fly, but he pulls a wagon full of supplies across Rochester.

"Juice for people who need sugar, blankets, socks, underwear, lots and lots of water, it varies. Sometimes I get specialty items sometimes I get tents depending on what people need.”

Batman says he’s not helping people for the "Superhero" title. He wants the attention to gravitate toward others to lend a hand.

"Mental illness, addiction, these people don’t deserve any less help, they deserve just as much help as anyone else,” Batman said.

He says the Batman disguise all started when he helped a woman who was living out of her car, she needed a jump start. It seems small, but the gratitude from the woman changed his life. Batman says homeless or not, everyone deserves to be treated like a human being.