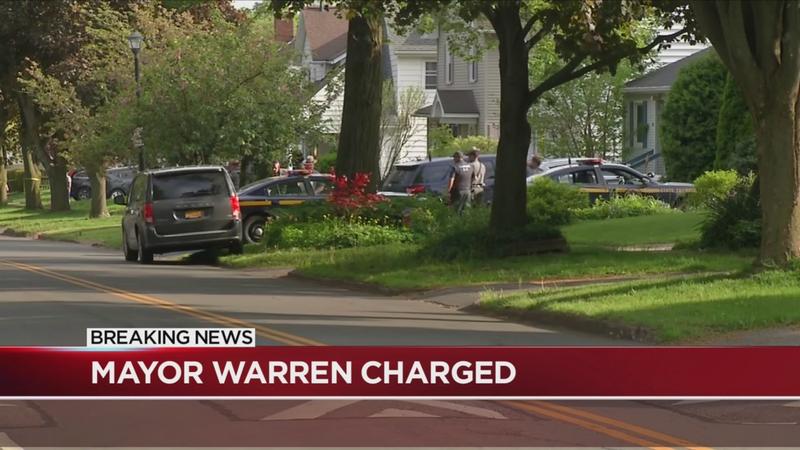 Mayor Lovely Warren and her husband, Timothy Granison's home being searched by New York State Police on May 19, 2021.[News10NBC]

Editor’s Note: News10NBC has updated this story to correct the brand of pistol found in Mayor Lovely Warren’s home.

ROCHESTER, N.Y. (WHEC) — Rochester Mayor Lovely Warren and her husband, Timothy Granison, have been charged with criminal possession of a firearm, which is a Class E felony, two counts of endangering the welfare of a child and two counts of failure to lock/secure firearms in a dwelling.

The DA’s Office says the indictment was a result of the search warrant New York State Police executed on May 19 at Warren’s home.

A Standard Manufacturing STD-15 rifle and a Kel-Tec P-40 pistol were found in the home during the search, and Warren and Granison’s 10-year-old child was left home alone during the raid, according to the district attorney’s Office. The weapons were not registered to Warren or Granison.

Warren and Granison are to be scheduled for arraignment before Cayuga County Judge Thomas G. Leone in Monroe County. A spokesperson for the Monroe County District Attorney’s Office tells News10NBC the arraignment will likely be next week.

Granison is also charged with criminal possession of a controlled substance (narcotics), and third-degree criminal possession of narcotics (intent to sell) following the same search. He has pleaded not guilty to those charges. Granison is also facing federal charges. He’s accused of receiving bulk quantities of cocaine from a co-defendant then distributing it to others accused in the state case.

Warren appeared on News10NBC’s Rochester in Focus on June 20. Lynette Adams asked the mayor if she knew about Granison’s alleged activities involving drugs and guns before his arrest.

"Absolutely not," Warren told Adams. "I want to be clear that no drugs were found in the house. I did not know about the gun and since learned after this that the gun was registered to my mother-in-law."

Granison’s attorney, John DeMarco, told News10NBC’s Patrick Moussignac just before 5 p.m. Friday that he hadn’t seen the indictment or any of the supporting paperwork. He said during the preliminary hearing process in Rochester City Court he requested on behalf of Granison the opportunity for him to testify in front of the grand jury and he was not given the opportunity to do so.

Demarco said he was surprised to learn of this development and looks forward to the opportunity to get in front of the judge next week.

Mayor Warren’s attorney, Joe Damelio, told News10NBC’s Jennifer Lewke just before 7 p.m. Friday that he was just seeing the indictment for the first time and that the mayor intends to plead not guilty to all the charges.

Damelio maintained that the gun is registered to Warren’s mother-in-law, and says that the mother-in-law is often there to babysit and stay with Warren and Granison’s daughter overnight because of Warren’s busy schedule.

At 8:15 p.m. Friday, Warren posted a picture of her feet in white Nikes and white pants, captioned "I walk by faith" with the "prayer hands" emoji.

The indictment is below:

But what do these charges mean?

Donald Chesworth a partner with Tully Rinckey PLLC in the Rochester office explains how much time can be served for each count.

"Basically, if the firearm is in someone’s home they’re deemed to be in possession of it, as an e felony you can get up to four years in prison, or less than that, or you can be placed on probation for up to five years,” Chesworth said.

Since the rifle and pistol were found in Warren’s home during a search on the residence back in May, while Warren and Granison’s daughter was home alone, that is where the child endangerment charge and the failure to lock and secure firearms came from.

"Those are Class A misdemeanors, and for those charges, one could be sentenced up to a year in prison, and its possible you can get probation instead of jail time,” Chesworth said.

Chesworth also said the charges are serious because it involves a child.

"They deal with any child who is under 16 years of age and to my understanding, the child here is 10 years old,” Chesworth said.

Under New York State Public Officers Law, an elected official is immediately removed if they are convicted of a felony.

Warren has not been convicted at this time, only charged.

These charges are not the only legal trouble Warren is in right now.

Warren and two others are charged with scheme to defraud and violation of election law for allegedly using an illegal PAC to raise more funds than allowed during her re-election campaign in 2017.

Recently, Warren’s attorneys attempted to get those charges thrown out, but on July 1, a judge ruled not to dismiss the indictment.

Warren and her co-defendants, Rochester Finance director Rosalind Brooks-Harris, and Albert Jones Jr. have all pleaded not guilty in the campaign finance case.