James made the announcement at Aenon Missionary Baptist Church in Rochester. 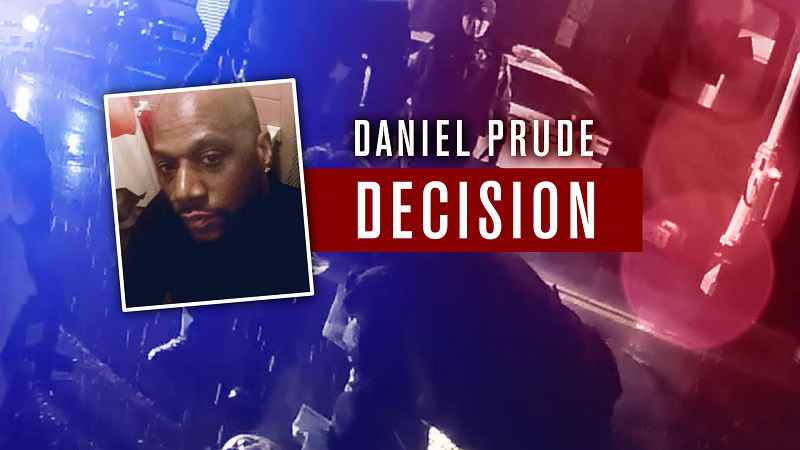 James said she felt there was sufficient evidence to present the case to a grand jury, but the grand jury decided not to indict. The attorney general released a comprehensive report with detailed descriptions of the events of March 22 and 23, 2020, legal analysis, all the evidence, findings, and recommendations that the office collected during the investigation outside of the grand jury process.

“Daniel Prude was in the throes of a mental health crisis and what he needed was compassion, care, and help from trained professionals," James said. "Tragically, he received none of those things. We concluded that there was sufficient evidence surrounding Mr. Prude’s death to warrant presenting the case to a grand jury, and we presented the most comprehensive case possible. While I know that the Prude family, the Rochester community, and communities across the country will rightfully be devastated and disappointed, we have to respect this decision."

BREAKING: The @RochesterNYPD police officers involved in the #DanielPrude case will NOT face any criminal charges. @TishJames says she felt there was sufficient evidence to present case to a grand jury but the grand jury decided not to indict. @news10nbc pic.twitter.com/QJgSeIanFh

Body camera video released from the scene on Jefferson Avenue shows Prude naked in the street in March 2020. It shows some erratic behavior, but it shows he followed police commands. When he tried to sit up while handcuffed, the video shows police put him back down on the ground and pinned him.

The video also shows one officer in a push-up stance with his hands on Prude’s head and neck. Less than 10 minutes after he was handcuffed, Prude stopped breathing. He had no pulse and was getting CPR when he was put in an ambulance. Prude died a week later after he was taken off life support.

The Monroe County medical examiner listed the manner of death as homicide caused by “complications of asphyxia in the setting of physical restraint.” Excited delirium and acute intoxication by phencyclidine, or PCP, were contributing factors, the report said.

Lawyers of the officers involved say Prude died from the effects of the drug PCP, not the officers’ actions. The officers’ lawyers told News10NBC they did what they were trained to do. In September, the lawyers released the New York state training video that, they say, shows how the officers were taught to restrain someone on the ground.

In December, the City of Rochester’s Office of Public Integrity released its report, saying it found "no evidence" that any city employee violated any "policies or ethical standards" in Prude’s death.

James said "serious concerns" about the actions of the Rochester Police Department remain. She issued a number of recommendations to the RPD to address these concerns, including its handling of mental health crises.

"Serious reform is needed, not only at the Rochester Police Department but to our criminal justice system as a whole," James said. "I will be pursuing a multifaceted approach to address the very issues that have prevented us from holding officers accountable when they improperly use deadly force."

James met with Daniel Prude’s family privately after she made the announcement. She said she also plans to meet with community leaders and criminal justice reform advocates while she’s here in Rochester.

Watch the video in the player below to see James’s full announcement:

Watch the video in the player below to hear from legal expert Peter Pullano:

Former Rochester mayor Cedric Alexander also weighed in. You can watch the full interview below:

Learn more about the death of Daniel Prude here.

News10NBC will have continuing team coverage on-air and online.