Price joined the Rochester Police Department in 1947. When he took the oath, he became the first Black man to serve the department. He worked his way up the ranks from detective to captain.

During his career, he worked security for both Martin Luther King Jr. and Malcolm X on their Rochester visits.

Price retired from the Rochester Police Department in 1985.

The cause of Price’s death has not yet been released. 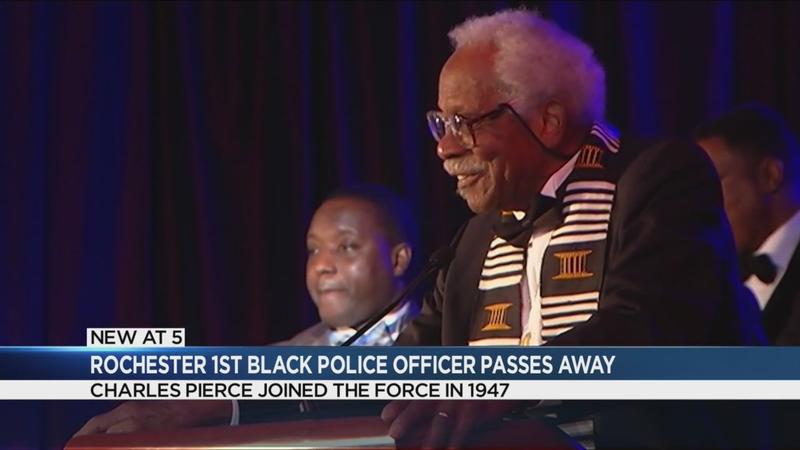 “I was filled with great sadness when I learned of the passing of retired Police Captain Charlie Price, Rochester’s first African American officer. I fondly recall presenting him with a ceremonial Rochester Police Department Sword in honor of the Department’s 200th Anniversary in December 2019.

"Captain Price joined the RPD as the Department’s first African American officer in 1947, rising through the ranks until he retired in 1985 as a captain – a remarkable and historic 38-year career! Along the way, he blazed a trail and set an example of excellence for other officers to follow.

"When I found out that we would be forging these beautiful swords as part of the Bicentennial celebration, I thought it would be fitting that Captain Price – who is such an important part of the RPD’s history – should have one. The inscription on the blade reads: “Captain Charles Price – Service – December 1947 to March 1948 – First of Many.”

"On behalf of the citizens of Rochester, I extend my deepest condolences to Captain Price’s family, friends and colleagues. We are eternally grateful for his service and for leading the way for others to follow.”

“As a fellow African American first responder in the City of Rochester when I was a member of the Rochester Fire Department, I have Captain Price to thank for blazing the trail for people of color to be on the front lines in protecting the community.”

“Without him having the courage to step up in 1947, many people in our community wouldn’t have had the opportunities that we have had. He endured racism and segregation as a member of the RPD, but didn’t let that stop him from rising all the way from an officer on the street to a leader in the Department as a Captain when he retired.”

"On behalf of myself and the members of the Rochester City Council, I want to express how deeply saddened we were to hear of the passing of retired RPD Captain Charlie Price, a man whose commitment and courage helped change our community for the better, both inside and outside of the Rochester Police Department.

"As the first African American police officer hired by RPD, Captain Price served our city with distinction. From the day he was sworn in on December 1, 1947, until he retired 38 years later in 1985, he was an exemplary officer, an outstanding role model, and a source of great pride for Rochester’s Black community.

"A native of Rochester, Captain Price’s service to community where he was born and raised extended far beyond law enforcement. During his lifetime, he was involved with a number of organizations dedicated to helping others, including the YMCA, the United Way, Kiwanis Club, Pathway Houses, Eureka Masonic Lodge and the NAACP.

"I am honored that during my 30-year tenure as a City of Rochester employee, I had the opportunity to know Captain Price. Our community has lost one of its finest native sons.

"The City Council sends its sincere condolences to the family, friends and former colleagues of Captain Charlie Price. Rest in peace, thy good and faithful servant."