ROCHESTER, N.Y. (WHEC) — A lot is known about Frederick Douglass and his contributions to Rochester and the world, but what many people may not hear about is the role that his wife of 44 years, Anna Murray Douglass, played in his life.

"There wouldn’t have been a Frederick without Anna," said Erica Mock, the Executive Director of Frederick Douglass Family Initiatives in Rochester. "I mean, she initially was the one who encouraged him to seek freedom and made sure that she provided things for him like selling her personal belongings in order to ensure that he would in fact be free. She didn’t want the future father of her children and her husband to be bonded by those chains anymore."

Michelle Daniels founded the Frederick Douglass club at School #12 and commissioned the Douglass mural at the Rochester Airport now named in his honor, as well as and one in Maryland. She says Murray was an accomplished woman at 17 when she met her future husband.

"But when she was a teenager, 16, 17 years old, she decided she was going to go to Baltimore, that she was going to work," Daniels said. "She was going to use her skills and her talents, mind you. This is Baltimore in the 1830s 1840s, where you have white men who found it difficult to find a job."

Daniels said in today’s terms someone like Murray Douglass would be considered someone who had it going on. She made money as a laundress, had savings and was connected to the who’s who of Baltimore society. 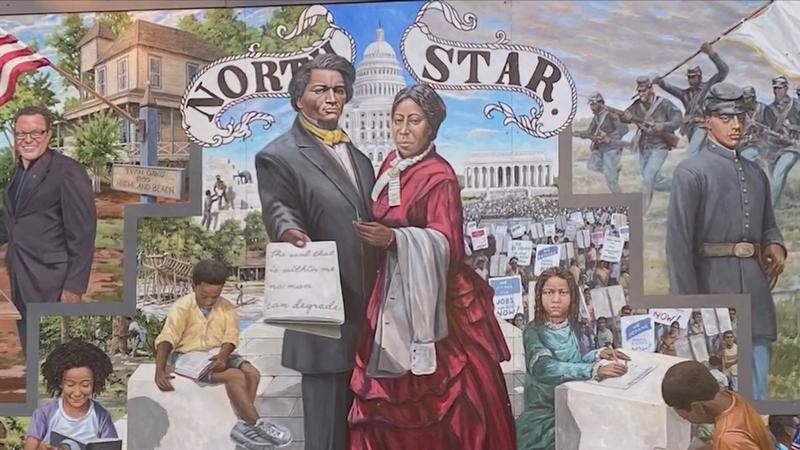 "Here it is, this black woman just escaped slavery by years and the stigma of being born into slavery and was working for prominent people like the Wells family. That was the postmaster," Daniels said.

Historians have said Murray Douglass was illiterate and unsophisticated. Yet Mock and Daniels says these are the descriptions provided by Caucasians and say evidence shows otherwise. Daniels said one clue is a letter written by the Douglass’s oldest daughter, Rosetta.

"And one of the things that they did is that they passed this Bible around the kitchen table, and each one would take a turn reading until the chapter was over," Daniels said. "She did not say we read to mother or we read and skipped mother."

The women say Murray Douglass could have written books and given speeches like her husband, but chose to raise and educate their four children and in Rochester, was instrumental in helping to run the Underground Railroad.

Mock said it’s disappointing that so little has been written about Murray Douglass… like how much Douglass loved and respected her.

"Most people don’t see 44 years in their marriages these days," Mock said. "So that’s something to be said for but she definitely was his personal North Star. I mean, there’s without a doubt."

But more than that, she says Murray Douglass is a role model.

"Not just then, but even now… Black women still get titled as things right?" Mock said. "So we’re excited about something just don’t get the mad black woman syndrome title. If we’re, you know, if we are, you know, strong because we overcome something then there’s that negative connotation of the strong black woman. So I think that there’s just so many things that she debunked, that we all can look forward and up to and use that as a kind of a guidepost for ourselves even not just as black women, but just all women."