The school was on lockdown for about 40 minutes and police say they arrived on the scene just after 1 p.m. to separate several small groups fighting throughout the building.

A Rochester City School District School Safety Officer was injured and transported by ambulance. Two students were evaluated on scene but refused care. Police maintained a presence outside the school during dismissal, though some confrontations continued and members of the city’s "SNUG" team had to separate some students before they got on their buses.

One student told News10NBC there didn’t seem to be a clear inciting incident.

"Out of nowhere," junior La’Zarioa Lott said. "It just started out of nowhere. I heard mad yelling in the hallway, so much yelling and then people to start fighting." 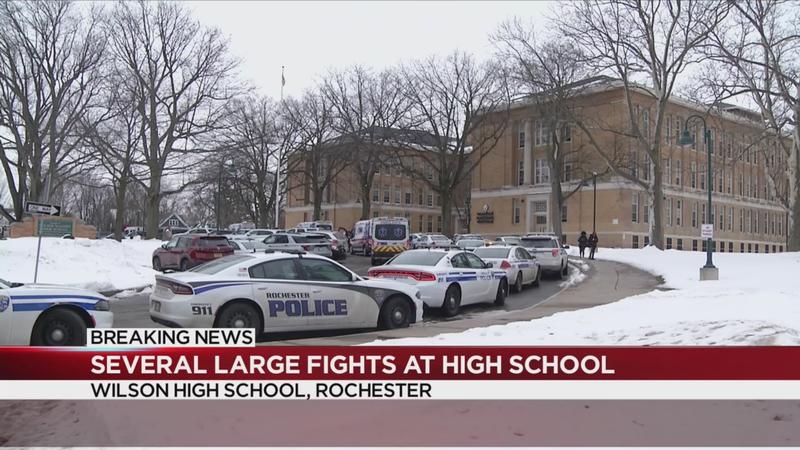 Another told us there were about 80 people involved.

"In the hallway, at the time, it was about like 80," junior Zi Joseph said. "About 80. Eighty students in one hallway. And they were just crowding around. It was so clamored. I felt like I was about to have a panic attack. It was just so much."

Many parents were waiting outside, anxious to hear what was going on.

"I just received a phone call saying that it was over 200 kids at Wilson fighting," parent Ramon Wiggins said. "My son goes here. There’s other parents out here that’s out here that are concerned about their kids."

No arrests have been made.

RPD says the groups are working with conflict mediation services while they investigate the cause of the fights.

The RCSD sent the following statement:

"Earlier this afternoon, a number of small fights occurred inside Wilson Magnet High School. As a result, the school was placed in lockdown for approximately 40 minutes. The Rochester Police Department was called in for assistance and remained throughout our dismissal today to ensure the safety of everyone. One staff member was injured and the District is investigating the situation.

"At the same time of these incidents, a student suffered an unrelated medical condition, which prompted ambulance and fire units to respond to the school. The District thanks the swift action of its Safety and Security Department, and is grateful for the assistance and quick response from Rochester police, fire, and ambulance personnel."