Wright, a 20-plus year veteran of the Rochester Police Department, was injured while responding to a call on Peck Street in the city in October 2019. He was stabbed multiple times and ended up losing sight in both of his eyes.

Wright addressed a crowd of fellow officers and community members and said receiving the awards was a "humbling experience." He detailed the "weight" the incident, and his recovery put on him and his family, but expressed gratitude to the department, and his family for their support. 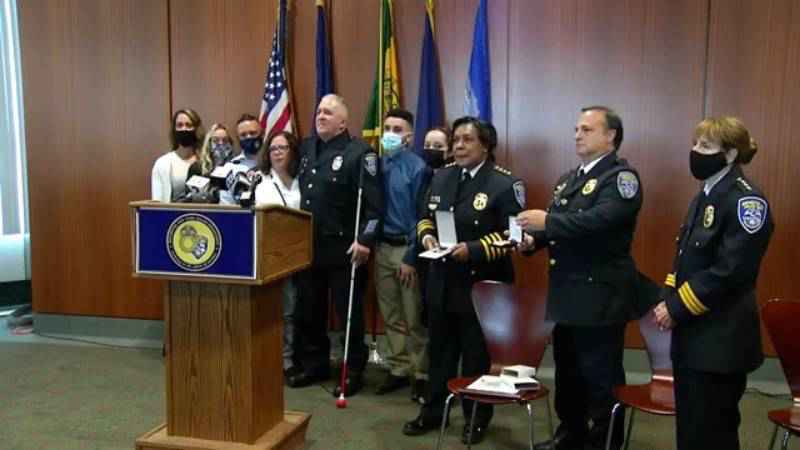 "This is the best job in the world, and the people who do this job are exceptional human beings," Wright said. "And the community here is also exceptional, which is why we can go out there every day and do our best to protect and to serve."

During the roughly half-hour ceremony, the department also gave awards to the fellow officers who responded to the scene and helped Wright out. Three good Samaritans who ended up saving Wright after hearing his calls for help from inside the house were also given awards.

Denny Wright says he has no anger or bitterness over the attack that ended his 20 plus year career as a Rochester police officer. pic.twitter.com/lTa9I61InN

Three weeks after the attack, Wright was released from the hospital surrounded by family, friends, and other members of law enforcement.

"In the front of this building there is a memorial next to the flagpole, and it contains the names of officers who have died in the line of duty," Wright said. "Because of these people here, these officers, the civilians, and the hospital, my name is not on that stone."

A judge found Keith Williams, the suspect accused of attacking Wright, competent to stand trial in August 2020. Williams is charged with attempted aggravated murder, attempted murder and aggravated assault of a police officer.

Wright filed a notice of claim against the Rochester Police Department, the City of Rochester and Monroe County in December 2020.

Court paperwork states Wright has not recovered and is seeking compensation for his injuries.

The notice of claim alleges there were many documented incidents and calls at Williams’ home, but no notices or warnings were attached to the address, which typically warn officers a different protocol is required while responding to ensure their safety.

According to the notice, that is why Wright responded to the call without backup.

Despite the claim, Wright said he was not bitter about the attack and did take time to thank the former command staff at the time of the incident, including former Chief La’Ron Singletary.