ROCHESTER, N.Y. (WHEC) — Heads up parents, Regional Transit Services Tuesday said it will make some bus route adjustments to help get kids in the Rochester City School District to school.

The RGRTA Board unanimously approved the move. The change will apply throughout the day on weekdays and weekends and will go into effect next Monday.

The meeting came after the district moved the first day of school to Thursday due to the transportation crisis the district is currently facing. In a letter that was sent out to parents Monday, the RCSD said it would no longer provide transportation for students who participate in the Walker-Bus Program and students who live within a 1.5-mile radius from their school.

Motion to help @RCSDNYS was unanimously approved by the RGRTA Board. @news10nbc

That decision affects more than 400 students at Dr. Walter Cooper Academy School No. 10, Enrico Fermi School No. 17, and Abraham Lincoln School No. 22

According to News10NBC’s Emily Putnam, with the motion now approved, RTS customers will soon see updates on bus stop monitors letting them know changes are coming to bussing schedules.

If the motion to help RCSD is approved by the RGRTA Board, RTS customers will soon see updates on bus stop monitors letting them know changes are coming to bussing schedules. @news10nbc

The proposed RTS-RCSD agreement is a 4-month agreement. If the district does not have enough drivers after 4 months, they may have to go to a month-to-month situation. @news10nbc

The agreement will go for at least four months. If the district does not have enough drivers after the four months, they may have to go to a month-to-month situation. 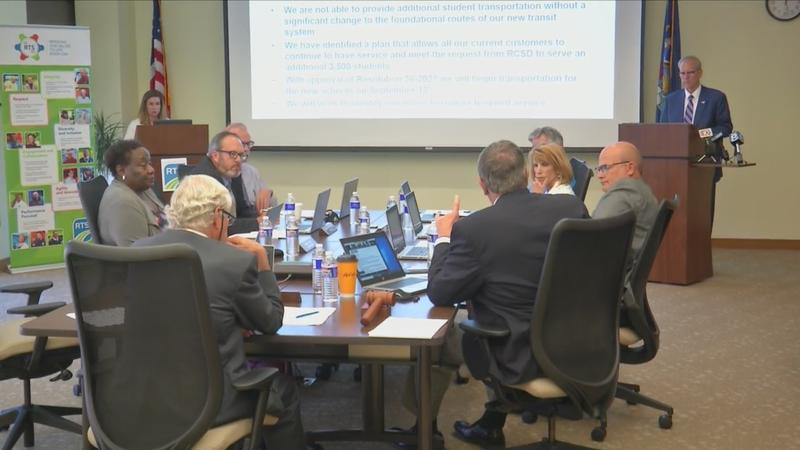 Board members expressed concern helping out the district could cause a "transit problem" for other riders.

“We are going to fix the school district’s problem, but then we’re going to have a transit problem” -Board Chair Don Jeffries @news10nbc

RGRTA and RTS will ask for the community’s patience and understanding (especially employers) as RTS customers will likely have to adjust their schedules, and many could be late to work. @news10nbc

The plan the superintendent rolled out Tuesday out won’t actually need the board’s approval. The board has already given its OK to the calendar change.

At this point, all the challenge is notwithstanding, School Board Member Ricardo Adam said he’s looking forward to this Thursday.

Adams: "Doing whatever it takes. There’s always going to be an exception to the rule. But come over, either going to make it happen, as a committee, because that’s all I hear: People expressing willingness to pitch in."

Molineaux: "Does this look better than it did last week?"

Rochester’s school board held its regularly scheduled meeting at 5:30 p.m. on Tuesday. You can watch it in the video in the player below (Mobile users, click here):