ROCHESTER, N.Y. (WHEC) – With COVID-19 rates declining and a state supreme court judge calling into question whether Governor Kathy Hochul had the authority to implement a statewide mask-mandate many of you are wondering whether she might just lift it soon.

The issue is of particular interest to school districts under pressure from some parents who are pushing to unmask their children.

Monroe County School Superintendents have been meeting weekly, “we are interested in joining the conversation that’s picking up across the state relating to where the off-ramp is,” says Bo Wright, the Superintendent of Rush-Henrietta Schools and the current President of the Monroe County Council of School Superintendents. Wright says the mask mandate for students has dominated the conversation as of late but their hands are tied, “this isn’t a political issue for us, it’s a health and safety issue and as school leaders, we are required to implement the directives that come out of the state. We’re not in a position to defy those at this point,” he tells News10NBC.

Governor Hochul’s emergency order for schools expires on February 21st. She hasn’t said yet whether she will extend it, “when are masks coming off at schools? We’ll be making some announcements in the short-term as we see the numbers progressing but I’m also watching vaccination rates so that’s a message to all parents and school leaders and teachers in influencers, the more children who are vaccinated, the safer they’ll be when they go to school, at the time we get to when they won’t need a mask anymore which were striving for but we’re just not there yet,” she said at a briefing on Friday.

Brighton is one of the highest vaccinated districts in New York, upwards of 85% of students and staff have had at least their first dose of the vaccine but even if the Governor lifts the mask-mandate, “our district won’t be looking at it as we will only be doing what the state requires or doesn’t require,” says Superintendent Dr. Kevin McGowan. The Brighton School Board has tasked the superintendent to create a set of metrics that will be used to determine when and how it will ease restrictions, “certainly we want to be respectful of feedback but I will tell you the most important feedback in the conversation for us are those in the medical, health-related fields that are reporting to us what they feel is the best practice for kids,” Dr. McGowan says. 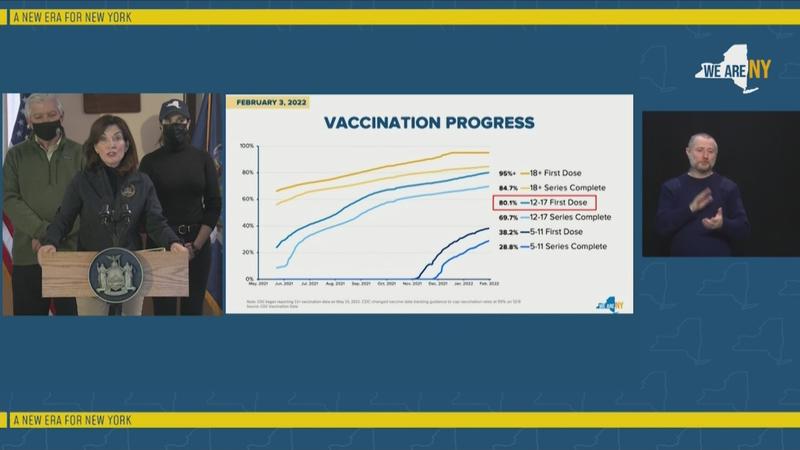 Other local districts tell News10NBC they are still in discussions about how quickly masks will become optional when and if the Governor allows it, “that hasn’t really been decided, I think it has to be a collaborative conversation,” says Wright.