ROCHESTER, N.Y. (WHEC) — The seventh night of protests over the death of Daniel Prude ended without any major clashes between police and protesters early Wednesday morning.

The Unity Ride of Silence rolled through Rochester earlier Tuesday night. It began at Bull’s Head Plaza and continued past the location on Jefferson Avenue where the March 23 encounter between Rochester police and Daniel Prude took place.

The bike ride was organized by SAVE ROCHESTER-BLM in an effort to bring awareness in a different way.

Free the People Roc organized a protest and march that began at the same place on Jefferson Avenue at 7 p.m.

Speakers addressed the crowd of protesters before the painting began.

After the mural was finished, speakers addressed the crowd again before kicking off the march to the Public Safety Building, where the word "murderer" was painted on the street outside.

Actually the word “Murderer” is being painted in front of PSB. pic.twitter.com/UEFGWTqThn

One of several chants used Tuesday nights was, "La’Ron left, now Lovely’s next," in reference to RPD Chief La’Ron Singletary’s announcement that he will be retiring this month. Protesters have called for his resignation, as well as Rochester Mayor Lovely Warren’s.

"These things don’t happen because people are being good people, or because they think it’s the right thing to do," organizer Ashley Gantt said. "These things are happening because of you. because of people power. because we’re out here every night putting our foot to their necks." 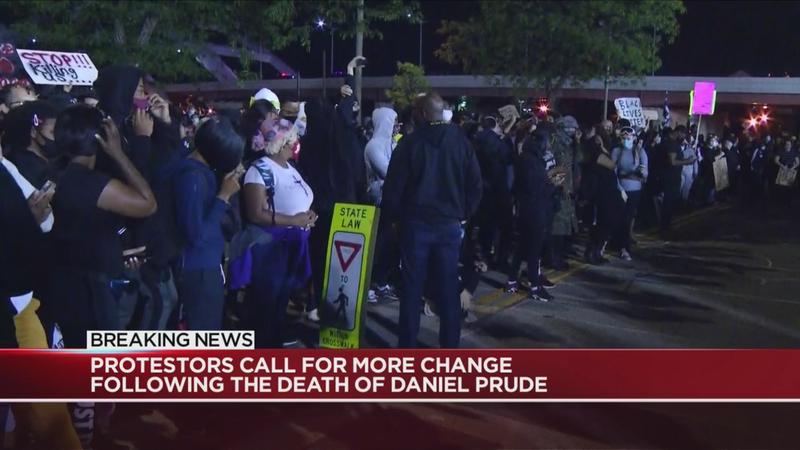 Protesters left the Public Safety Building after staying there for about an hour, they marched to City Hall, where speakers continued to address the crowd and "resign" was painted on the street.

Crowd still at City Hall. Resign painted in red on the street. pic.twitter.com/DkOxbQQL30

Organizers announced the end of the protest just after midnight.