Daniel Prude died after he stopped breathing in Rochester police custody on March 23, 2020.

Prude’s family is suing the city for $75 million, seven RPD police officers are still suspended waiting on a state grand jury decision and Singletary was fired by Mayor Lovely Warren in September.

This is the first time we’ve heard Singletary’s story. Singletary is suing the city.

In the first several hours of testimony, Andrew Celli, the lawyer hired for the city council’s investigation, pressed Singletary what he told the mayor when the mayor watched the body camera video and why didn’t they tell the public about prude’s death.

Here’s what Singletary says he told the mayor the first during their first conversation about Prude, four hours after Prude was taken to the hospital. 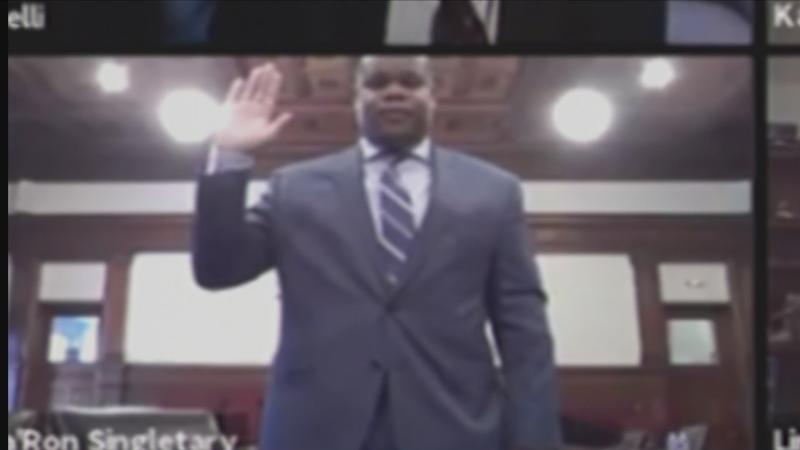 Singletary: "Initially that Mr. Prude was compliant as well as officers had taken him into custody as well as at one point, the officers went hands-on with Mr. Prude and at some point went unconscious."

Celli: "In that first call, did the mayor ask for an opportunity herself to view the body worn camera video?"

In between the March 23 talks with the mayor, Singletary says he watched the body camera video.

Celli: "Did you conclude after watching the video you viewed that day and before you spoke to the mayor, a second time, did you conclude nothing of a criminal nature happened."

Celli: "At any time in that call did she say, chief I’d like to have a look at the BWC footage?"

Singletary: "No she didn’t."

Celli: "Did you suggest to her, you know mayor this is a serious incident I’m describing to you, you might to want to have a look at the BWC footage?"

Singletary: "I did not. I gave the mayor the details based on these two documents as I had them and said we were ordering investigations."

Celli: "I’m trying to get to your thinking…"

Singletary: "Mayor is direct. If she wanted to see the footage she would have told me."

Celli: "Do you have any evidence or information within your knowledge, direct or indirect that suggests the mayor saw the BWC footage of the Prude mental health arrest at any time prior to August 2, 2020?"

At one point, Singletary was asked if anyone urged him to show the police video to Mayor Warren prior to Aug. 4, the first time she says she saw it.

Singletary: "No city official did. No."

Celli: "So if someone said they urged you did that prior to August 4th on multiple occasions they wouldn’t be telling the truth. Is that your testimony?"

Singletary: "That is correct. No one had conversations with me about showing the Mr. Prude video to anyone at City Hall. Yeah, they would be lying."

At one point, Celli questions Singletary about his April email to the mayor’s spokesman, Justin Roj, which did not mention certain police tactics when they pinned Prude to the ground and did not mention the primary cause of Prude’s death which was asphyxiation in the presence of physical restraint.

Celli: "Did you select this document because it did not mention those items or any of those items?"

Singletary: "No. As I stated it was Good Friday. I was at home. This is what I had available to me in my folder. And this is what I sent to Director Roj. Again, there was no attempt to cover this up."

Singletary says he texted the mayor on Friday, April 10 saying he wanted to talk to her about the medical examiner’s ruling on Prude’s death.

Celli questioned Singletary about his face to face meeting with the mayor the following Monday, April 13.

Singletary says that’s when he told the mayor it was ruled a homicide.

Singletary: "And she said homicide? Yeah, we figured from contributing factors based on the officers held Mr. Prude down."

Celli: "When you told her it was a homicide, she expressed surprise at that?"

The questions went to August when the mayor says she first saw the body camera footage.

Celli: "So the mayor calls you up on the phone on the 4th and what does she say to you and what do you say to her?"

Singletary: "She talks about the body warn camera video and how she saw, she described it as murder – those police officers murdered Mr. Prude."

Singletary testified he reminded the mayor he told her it was ruled a homicide in April.

“Today’s testimony proved that Mr. Singletary never shared the video depicting what truly happened to Mr. Prude with Mayor Warren prior to August 4. He stated in his opinion that ‘nothing egregious’ happened, disagreed that RPD officers were directly responsible for Mr. Prude’s death, and even went so far as to say everything was done ‘by the book.’ He downplayed what occurred from the very beginning through today, and believes that neither he, nor anyone in the Rochester Police Department, did anything wrong. Mayor Warren believes we need to move forward with honoring Daniel Prude, and all the past victims of police violence, by doing the necessary work to reform policing and achieve equity in Rochester.”