Snow brush, snow shovel, and even the snow blower will be used by some this weekend

ROCHESTER, N.Y. (WHEC) — Winter is back this weekend with bitter cold wind chills, and the use of the snow shovel by Monday morning. Cold air has already begun to filter in across the region, and it will continue to do so today. For Saturday, an isolated rain or snow shower will be possible.

No accumulation is expected today, but a better chance for snow to mix in will arrive this evening as cold air continues to wrap in. Most of the day will be filled with cloudy skies as a washout is not expected. Temperatures will be near average with highs in the mid 40s, but it will feel a bit cooler outside as winds begin to gust out of the northwest later today. The northwesterly winds will continue into tonight and through Sunday to set up the chance for lake effect snow.

Cold air will continue to wrap in as low pressure sits to our north, and we will see the full transition over to snow showers by midnight tonight. Lake effect snow showers will continue through the day on Sunday with areas southwest of Rochester having the best chance to see persistent lake snow and higher snow totals. Because of this, the National Weather Service has issued a winter Storm Warning for Wyoming County starting this evening and ending early Monday morning. Most of the region will see snow totals of 1"-3" but areas southwest of the city have the opportunity to see 3"-6" with localized higher amounts in Wyoming County.

Lake snow will limit visibility at times and stick to area roadways Sunday and Monday as temperatures drop into the 20s. Lake effect snow will continue into early Monday before tapering off during the afternoon hours. Not only will snow have impacts across our region, but the wind will as well.

Winds will be a bit gusty today with winds near 25mph, but wind chills will be tame as it could feel like the 30s this afternoon. The surge of much colder air comes in on Sunday. Wind chills early Sunday morning will likely be in the low 20s as winds gust to near 30mph. Wind will continue to gust near 30mph Sunday afternoon and wind chills will drop into the teens as air temperatures remain in the mid and upper 20s, and believe it or not it will only get colder from there. 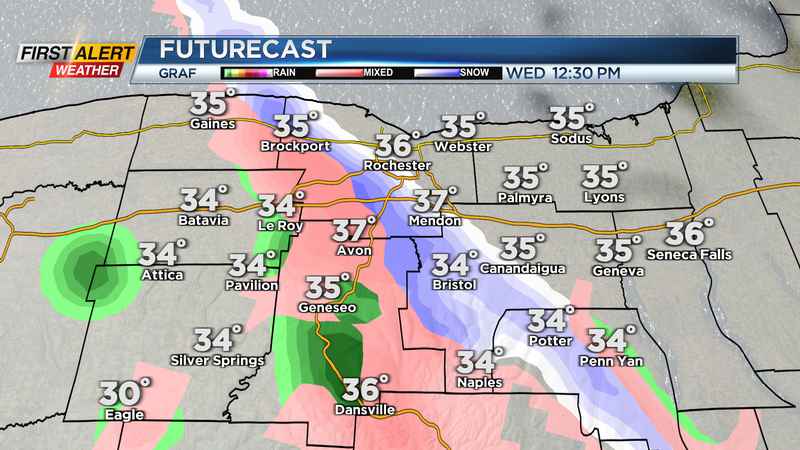 We will start Monday morning off in the mid teens with blustery conditions which means that it will again feel colder. Wind chills early Monday morning will likely be in the single digits and near or below 0 for some! Monday will be the coldest day out of the next 4 as high temperatures remain in the mid and low 20s, and it feel near 10 degrees throughout the afternoon. Colder weather will remain in place for Tuesday as well as high temperatures are stuck near the freezing mark.

The good news for Tuesday is that we are dry with sunshine returning, but will be a bit breezy and feel a touch cooler.