Brooks Ave between Genesee Park Blvd and I-390 was closed for a few hours as the county and a towing company pulled the vehicles out of the water. It has since reopened.

Seven snowmobilers were rescued Sunday afternoon, including one who fell through the ice.

HAPPENING NOW: Multiple agencies are recovering the snowmobiles that were involved in yesterdays rescue on the canal where 7 snowmobilers became stranded while riding. @news10nbc pic.twitter.com/PW39fCwdOX

“It was probably one of the biggest rescue operations I’ve been involved in and in June I will have 30 years in this business,” Gates Fire District Chief Alan Bubel said. “We basically had one incident spread over a couple of different locations at a little bit of distance and I think that really was the toughest part of the operation getting a handle on what was going on, how many people were involved and where they were.” 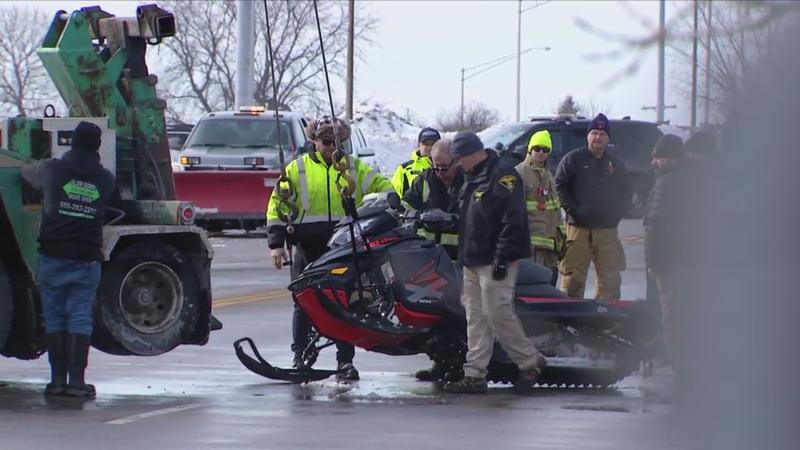 Crews pull snowmobiles from the Erie Canal on Monday, Feb. 7, 2022 after seven people crashed over the weekend.[News10NBC]

Bubel said one rider crashed in the ice and fell through. The other six were stranded on broken ice around Brooks Avenue when they noticed the ice start to thin out, but by then it was too late.

“It was obvious that the ice wasn’t solid, to begin with. but then also we had a rope operation down some pretty sheer faces and had to cut some debris away to make access,” Bubel said.

The county brought in a towing company to pull the snowmobiles out of the water.

“There’s no real easy access point for the wreckers so they’re forced to lift them onto the overpass just because if the ice paths we’re better we’d probably look to ride them somewhere safer and easier to extricate them from,” Monroe County Sheriff’s Office Sgt. Matthew Mackenzie said.

EMS officials tell us one of the riders was treated for hypothermia and the other that crashed into the ice was sent to the hospital after sustaining multiple broken bones and facial injuries.

“They’re very fortunate," Mackenzie said. "We understand one gentleman is in surgery today because of his injuries but he’s lucky he escaped with his life. A very foolish thing to do and a hard lesson to learn."

Mackenzie said they are all lucky to be alive and glad crews were able to safely get them out.

“There is no such thing as safe ice.. all ice you are on has danger, Gates Volunteer Ambulance Service Assistant Chief Daniel DiSalvo said.

He said their team worked to evaluate the riders after they were stranded on the ice and said they’re trained for cold-weather emergencies with the fire department, rope rescue teams and special operation teams for large-scale incidents like this.

“If you’re going to go out make sure you’re wearing a life vest, something you can wear over your jacket, something that if you get through an area that’s thin and you go though you will be able to get yourself out and sustain with a life vest,” DiSalvo said.

Officials said anytime you’re going out on the water you definitely want to test the depth of the ice, especially on places with overpasses and road salt being deposited on the ice like the Erie Canal.

“Our experience with the canal that there’s no consistency in what the ice is doing so you may feel it’s safe wherever you get onto the canal but it doesn’t mean that ice is going to be that way all throughout your travels,” Bubel said.

Sgt. Mackenzie said if you are going to use a snowmobile, go with someone else, have a plan and carry a phone.

“Going on the trail, do not ride off the trail, it’s treacherous. Trails are marked for a reason. There are trails on both the east side and west side of Monroe County, they are maintained by clubs, joining a club and help support their effort to maintain their trails,” Mackenzie said.

All said they’re lucky to have made it out of this ok, but said sometimes it doesn’t always end with good news.

There are no guarantees and sometimes, unfortunately, the only way that you find out the ice isn’t strong enough to hold you is when you go through and it puts you at risk, rescuers at the risk and it’s just not worth the gamble,” Bubel said.

"On Sunday, 2/6, DEC received a call for assistance with seven snowmobiles that broke through the ice in the Erie Canal in the vicinity of Chili Ave., in the Town of Gates. When DEC arrived on scene, two snowmobiles had gone through the ice and the operators were being transported to Strong Memorial Hospital with injuries. The remaining five snowmobiles were stranded on unsafe ice and the operators were in the process of being evacuated.

"Due to the potential for oil from the snowmobiles to impact the water, a DEC spill report was also generated.

"There was no visible petroleum sheen observed at the sites of the submerged snowmobiles. No environmental charges have been issued at this time."