CANANDAIGUA, N.Y. (WHEC) — A developer wants to build 118 townhomes in Canandaigua, but many neighbors in the area are not for it. The town hall held a public meeting Tuesday night, and the room was full of people in opposition to Canandaigua Shores.

The $28 million project is fronted by ATL Contractors, which has been involved in other development projects in the Finger Lakes, like the 82-unit Keuka Shores development in Penn Yan. People who live in the area or miles within where the proposed project would land, have major concerns.

"I live on Thorndale Beach, which is about a mile south of the project, and I have a number of concerns,” one resident said.

Another resident who addressed the board said, “This project is not in tune with the town’s priorities and its commitment to protecting Canandaigua Lake.” 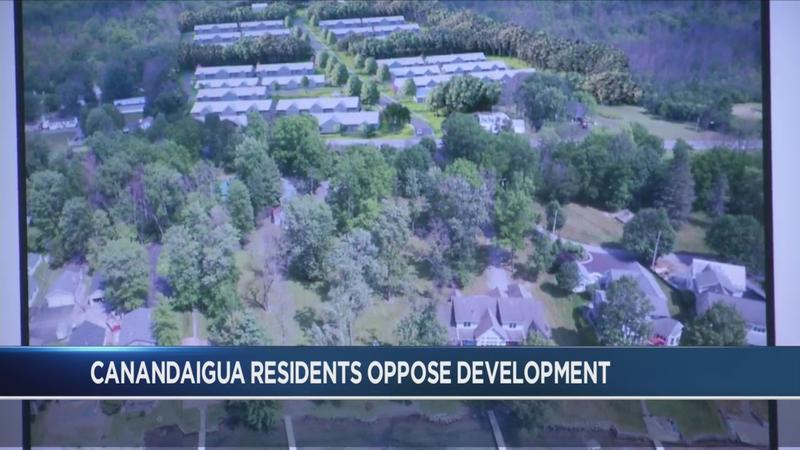 The contractors are looking to build these townhomes on 33 acres currently filled with trees and brush that extend into the town of Hopewell. The project would also border Gorham.

"There are critical streams that drain to the lake that need to be taken into account in this development,” another concerned resident said.

The range of concerns includes an increase in traffic, size, the amount of green space, and more. Faces of the project say concerns like water quantity and quality will be addressed as part of this process, but they believe the project fits in with what the town is looking for according to its comprehensive plans.

"This is a mixed-use zone," Brennan Marks of Marks Engineering said. "It’s zoned for this development. The Town of Canandaigua Comprehensive Plan states that it would like to add 1,300 residential units to the town so this project would fit 118 of them,”

The town of Hopewell will have a public hearing on July 26. Developers say if this project is approved, the estimated timeline of completion is two to three years.