State and local officials react to the two RPD officers shot, one fatally

ROCHESTER, N.Y. (WHEC) – State and local officials are reacting Friday afternoon to the news of the fallen officer and his wounded partner.

New York State Gov. Kathy Hochul said in a statement this morning she is praying for the families of the officers and that "I am heartbroken by last night’s tragedy in Rochester. We will continue devoting everything we have at our disposal to fight the gun violence crisis and protect all New Yorkers. I know that all of New York is standing with the family of the fallen officer, his colleagues and the entire Rochester community."

Monroe County Executive Adam Bello released this statement Friday morning: "I pledge to continue my close work with Mayor Evans, Chief Smith and Sheriff Baxter to ensure our public safety and will make any necessary county resources available to these efforts."

Rochester Mayor Evans released the following statement: "Tonight, there were two Rochester Police officers shot; one is critically wounded. We are sending our strongest prayers that he survives his injuries.

"The tragic gun violence in Rochester must come to an end. Today, we declared a gun violence emergency in our community and this shooting is proof that we are indeed, in an emergency. 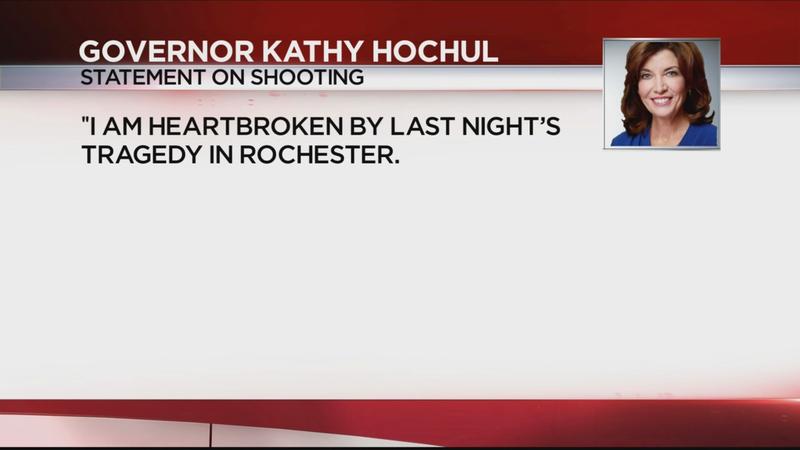 "Our police officers are out there sacrificing their lives for us every day. They perform their jobs in dangerous conditions as we go about our daily lives and we owe them a great debt of gratitude.

"I pray for the comfort of the officers shot tonight, and for their families, friends, and all of their fellow first responders."

Candidate for Congress and former RPD chief La’Ron Singletary released the following statement: “As the former Police Chief, my heart is hurting and I am thinking of the men and women of the RPD after learning that two former colleagues were shot during a detail on Bauman Street, killing one and injuring another.

"These brave heroes were doing their job protecting the citizens of our city and were viciously attacked by a coward who has no regard for human life. Our city is under siege, and we must stand with those who have sworn an oath to serve and protect us.

"Join me in praying for all the men and women of the Rochester Police Department and especially for the two heroes who knowingly put themselves in harm’s way in service to our city and its citizens."