The military medical team included 40 doctors, nurses, and surgical technicians. The Federal Emergency Management Agency (FEMA) sent the team to Strong Hospital 30 days ago to help during a time of understaffing that led to patient overcrowding. Strong staff applauded as the team left the hospital Thursday morning. The military healthcare professionals helped to attend beds that would be otherwise unstaffed during the omicron variant surge.

Staff Sgt. Josh Perry usually works at a hospital on an Air Force base in Las Vegas,

“I’m a respiratory therapist back home so not much changes—it’s just the quantity, the amount of people that you deal with is different on a scale as high,” he told News10NBC about his time in Rochester.

Maj. Kirsten Pyle runs a clinic at her base in Mississippi but while the Nurse was deployed at Strong. 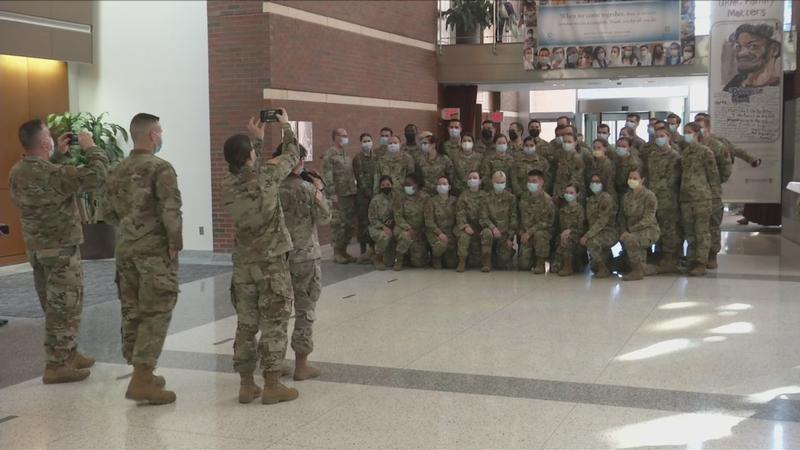 “I was part of the neuro-medicine unit, so it was a great opportunity to be back at the bedside something I haven’t been able to do for a while, to refresh some skills, learn some new things and then bring some of my experience to the table as well,” she said.

The military team worked mostly with stroke patients and those waiting for nursing home care.

“Having the military come and work, sort of give our staff a little respite so that they could work normal hours it just infused a lot of positivity,” said Strong Chief Nursing Executive Karen Keady. “They came in, didn’t know our systems and just boots on the ground, adapted very quickly and it just really affected morale in such a positive way.”

While the immediate staffing crisis is over, long-term Strong still has to rebuild its team to ensure its employees get more than just this 30-day respite. Currently, more than 15% of available positions at the hospital are vacant.

“We’ve learned a lot from them (military team) you know they do a lot of things differently in the military and so we were able to pick their brain a little bit and get some ideas about care models and how we can stretch our teams and really deliver excellent care,” Keady said.