Texans coach all too familiar with Bills QB Allen’s ability

“Tell them to go easy on us up there,” Culley said as the rebuilding Texans (1-2) travel to face the Josh Allen-led Buffalo Bills (2-1) on Sunday.

Allen has no intention to oblige by saying: “Don’t plan on it.”

The good-natured banter was exchanged between two people very familiar with each other. As Buffalo’s quarterbacks coach during Allen’s rookie season in 2018, Culley saw beyond the player’s raw inconsistencies to gain an up-close glimpse of his burgeoning potential.

“Basically what you did is you just wanted to get him fundamentally right because you knew it was all there,” Culley recalled. 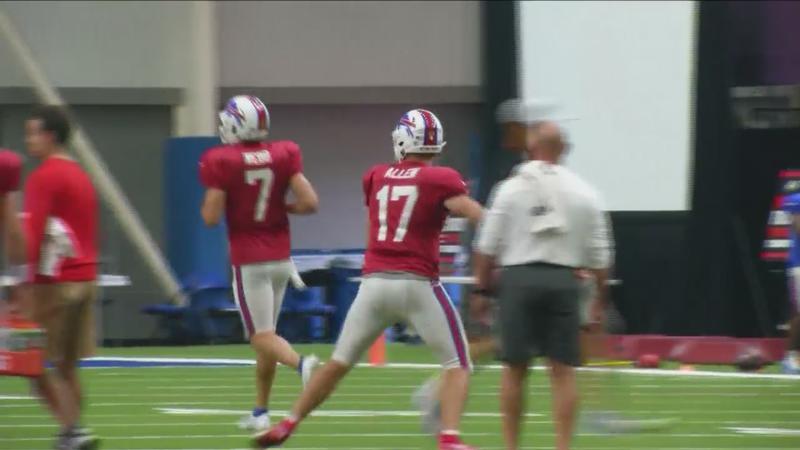 “I am not surprised at where he’s at now,” he added, before breaking into a laugh. “I wish he’d go back to being inconsistent for at least one more week.”

Allen shook off early season jitters in a 43-21 win over Washington last weekend. By improving to 9-0 when topping 300 yards passing, Allen threw four touchdown passes and rushed for another to regain the dominant form he displayed during his breakthrough 2020 season.

“I think it just gets the ball rolling, but there are still a lot of things we can learn from,” Allen said.

Whatever glitches remain can be worked out against a Texans opponent with question marks on both sides of the ball.

Houston has allowed an average of 386 yards and plays a Tampa 2-style of defense which guards against big plays, but is susceptible to a short-passing attack. The Bills feature a trio of established receivers in Stefon Diggs, Cole Beasley and Emmanuel Sanders, who are capable of finding soft spots in coverage.

On offense, rookie Davis Mills makes his second consecutive start in place of Tyrod Taylor, who is sidelined with a hamstring injury. Mills went 19 of 28 for 168 yards and a touchdown in a 24-9 loss to Carolina last week.

The Texans’ lone touchdown drive came when Mills ran a hurry-up offense and capped a seven-play, 64-yard drive with a 1-yard pass to Anthony Miller.

Otherwise, Houston combined for 147 yards and 10 first downs with six punts, a field goal and turned the ball over on downs on its other eight possessions.

Acknowledging the offensive game plan might have been overly conservative, Culley plans to allow Mills to do more this weekend.

Mills, however, faces a defense which has yet to allow 300 yards, and has gone 9-0 against quarterbacks with 16 or fewer starts since the beginning of the 2019 season.

Culley is equally familiar with Buffalo’s defense, which is mostly unchanged from 2018.

“It’s a challenge when you play good football teams,” Culley said. “What it does to us is it makes us have to be as good as we need to be to be able to have success.”

Allen hasn’t forgotten his previous meeting against Houston, in which Buffalo blew a 16-0 third-quarter lead in a 22-19 OT loss in an AFC wild-card playoff game in January 2020.

“Obviously it wasn’t a fun ride home and it was a long offseason,” Allen recalled. “Each week’s a better possibility for me to learn and grow but that one, since it was so long between games, it really, really drove me.”

Buffalo returns 27 players from 2019, while the Texans have only 12 players left on their roster from two years ago. They include quarterback Deshaun Watson, who has been listed as inactive/not injury-related following his trade request and after 22 women filed lawsuits alleging sexual assault or harassment.

Asked what the most important thing Mills needs to do to be successful Sunday, Culley didn’t hesitate by saying: “Get off to a good, fast start.”

The rookie didn’t do that last week, when Houston punted on its first four possessions. Mills is confident he’ll improve the more he plays.

“There’s no other way to gain experience than to go out there and get the live reps,” he said.

Receiver Brandin Cooks is on his third quarterback in two seasons in Houston. Despite the changes, Cooks has remained productive and ranks third in the NFL with 322 yards receiving.

“It’s the quarterback that’s throwing us the ball and making those decisions,” Cooks said. “So, my biggest thing is always figuring out what my quarterback likes and what he don’t like and trying to mold my style.”

The Texans are Buffalo’s second straight opponent coming off an extended break after playing on Thursday night.

They’re also the second straight opponent featuring a backup quarterback replacing a former Bills starter. Taylor went 22-22 in three seasons in Buffalo before being traded to Cleveland in March 2018. Last week, Washington started Taylor Heinicke in place of injured Ryan Fitzpatrick, who went 20-33 in four seasons in Buffalo from 2009-12.

So is Efe Obada