This year marks the 50th anniversary of the bombing. Members and supporters gathered outside the church on Thanksgiving morning to pray, give thanks, and reflect on the last fifty years.

Josetta Jackson’s late husband, Julius Jackson Sr., was the church’s pastor at the time of the bombing. She recalls a conversation they had when he received an unusual phone call in the middle of the night half a century ago.

"He said, the church has been bombed,” said Josetta. “I said, what are you going to do? He says well, I have to go. I said no baby you’re not going by yourself, we are going."

So, Josetta and Julius Sr. got their two young children into the car in their pajamas, and headed for Joseph Avenue. 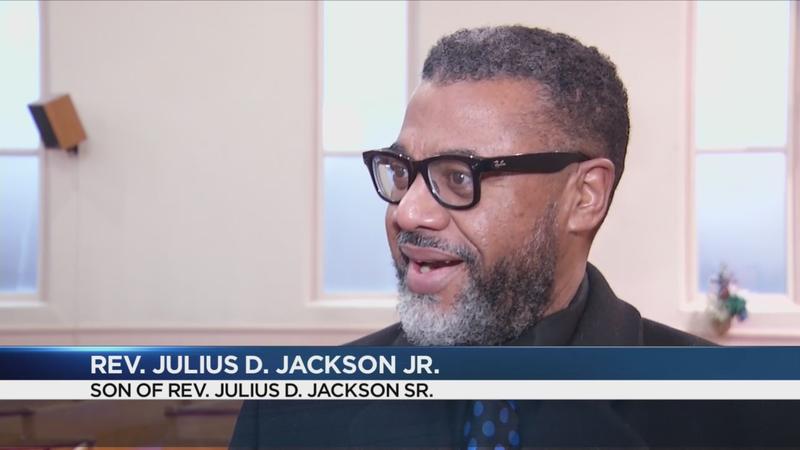 "I was six years old,” said Julius Jackson Jr., who followed in his father’s footsteps and became a pastor himself, now serving at Trinity Emmanuel Presbyterian Church. “It was a very impactful day. I remember being in the car when he was coming here to visit the site after he had been notified that it was bombed."

When the Jackson family arrived on Joseph Avenue, they saw the state of the building.

"The pulpit was basically in shambles,” said Jr. “There’s pictures of it now, but I remember we came back here often and we would see the damage, up until the time that it was remodeled."

Thankfully, no one was hurt in the blast as no one was there when it happened in the early morning hours. However, the explosion claimed almost all of the original stained glass windows – the one remaining stained glass window sits at the front of the building as a veritable symbol of the history, resilience, and strength within its walls.

"There’s more greatness still yet to be achieved,” said Jr. “I’m hoping that this day will inspire others to go and do greatness as well."

After a six-year remodeling and rebuilding process, the building reopened and was rededicated in 1977. In the interim, the congregation bounced around from church to church. Despite not having a worship “home” during that time, Jackson Jr. says the congregation actually grew in size.

"There are people who formed their relationship with Mount Vernon when we were not in this building,” said Jackson Jr. “A testament that the church is not the building, it’s just where we worship. The church is the people."

The blast certainly shook the building on that Thanksgiving Day, but it failed to shake the congregation’s steadfast faith and connection to each other.

To this day, no one has been charged and no motives have been determined in the bombing. Members of the congregation have several theories, although none have been proven. That uncertainty doesn’t seem to bother longtime parishioners – they are simply grateful to have returned home.

"No concrete answers, but the lord brought us back here and we are thankful for that,” said Josetta.

This Sunday will mark 82 years since the church was founded, and it’s still standing tall on Joseph Avenue in Rochester.