CONESUS, N.Y. (WHEC) — (UPDATED with DEC statement) The recent winter thaw is causing some major headaches for people living next to Conesus Lake in Livingston County: Ice jam flooding that is filling up basements and leaving some properties surrounded by several inches of water.

News10NBC Reporter Patrick Moussignac found out why town officials say they can’t do anything about the flooding.

Some Conesus neighbors live very close to land that’s protected by the New York State Department of Environmental Conservation (DEC), and it’s what’s on that land that’s holding up the removal of the ice jam.

One of those neighbors is Robert Osypian. He’s been pumping water out of his Sliker Hill Road home for days. 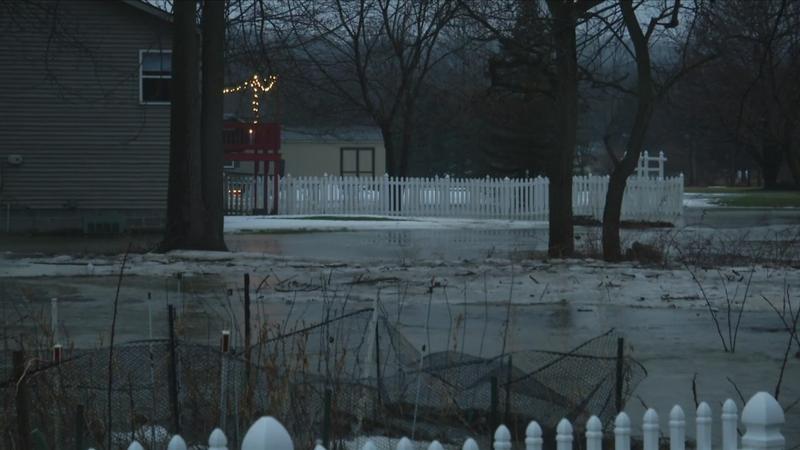 "Until the ice jam is free, until all the water is gone we’re in for a lot of damage still around the neighborhood, and in the area," Osypian said.

"We had to call the Conesus Lake Fire Department," Osypian said. "Volunteer fire department comes down Friday morning, pumps our basements out, and we’ve been running five pumps since Friday morning."

Osypian said the ice jams can’t be removed because just down the stream is the nesting site for two bald eagles.

"I guess the main concern is that if the ice jam were to damage any of their nesting habitat downstream it would disturb them," Osypian said. "That’s the reason they can’t break the ice jams up."

News10NBC spoke to Conesus Town Supervisor Donald Wester, who confirmed that eagles do nest in the area, and that the Livingston County Highway Department tried to remove the ice jam, but was prevented by the DEC.

"There is a permitting process that is permissible, but under these circumstances, we didn’t have time to get the permits in place," Wester said.

Wester said he will be meeting with Assemblywoman Marjorie Byrnes (R, 133) and State Sen. George Borrello (R, 57) later this week about protecting not only the nesting eagles but homeowners as well.

"So we can look at this, meet with the DEC and try to present a plan that we can work with as a team to help prevent this in the future.," Wester said. "In the past, if this has happened, they have come down and the eagles were there before, and they have loosened the ice jams, and now they’re not allowed to do it anymore because of the DEC ruling."

Wednesday, the DEC provided the following statement to News10NBC:

Neither the town nor the county contacted DEC recently regarding proposed actions to remove the ice jam on Conesus Lake. DEC is ready and willing to work with the town to help alleviate the situation prioritizing public safety while minimizing potential impacts to the local eagle population.

For now, the volunteer fire department will continue to provide pumps to homeowners who need them.