The Locust Club responded with this statement:

“The decision to suspend the investigator is perplexing. The incident in question reached a mutually acceptable resolution that day when both the investigator and the EMT were able to jointly discuss the reasons for their actions, and both accepted each other’s explanations.

Chief Smith has the authority to administratively transfer an officer for 60 days while an incident is under an initial investigation, which he chose to do. To now change that investigator’s status to suspension is without reasoning and gives the appearance that the investigator’s actions have already been judged or determined to be without merit. There is no indication that any additional information has been discovered. Supervisors from both RPD and Monroe were on scene and mutually agreed that both parties understood why each other took the actions they did.”

A Rochester Police investigator has been put on desk duty following an altercation with an EMT outside and inside the emergency department at Strong Memorial Hospital. 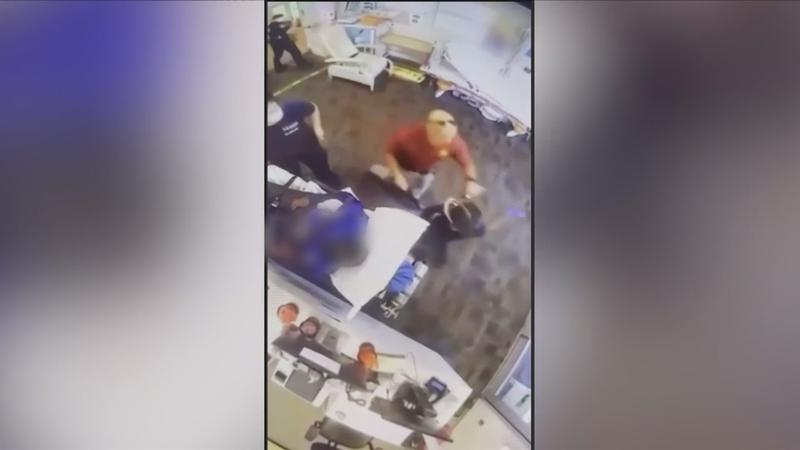 The investigator’s car was parked in the ambulance bay in front of the emergency room when an EMT hit it while opening her door to unload a patient. Sources tell News10NBC that the investigator insisted on getting her identification, she insisted on bringing the patient inside first. News10NBC Investigative Reporter Jennifer Lewke was able to get an exclusive video of what happened from there.

The incident happened on Monday. The ambulance bay in front of the emergency room is typically reserved for ambulances only but the investigator was parked there, planning to go inside for a case. Sources tell News10NBC that’s when the EMT from Monroe Ambulance got out to unload the patient and hit the police car with her door.

The investigator asked for identification but the EMT was intent on getting her patient inside first. She kept moving with the man on a stretcher and when she was at the check-in desk, she was approached by the investigator, her arm pulled behind her back and cuffed before forcefully being taken outside to a police car.

The Rochester Police Department tells News10NBC that the investigator in the video has been placed on administrative assignment and “at the direction of Chief Smith, the professional standards section is currently conducting an internal investigation.”

"Monroe Ambulance leadership and employees sincerely appreciate the outpouring of support through social media for our highly valued employee that was put in an untenable situation. We steadfastly stand by her prioritization of the care for her patient and are blessed by your willingness to publicly support her patient advocacy.

We would, however, appreciate resisting derogatory comments against RPD as an organization. This incident was perpetrated by a single individual and subject to investigation by his employer, everyone is entitled to due process regardless of opinion. We trust that the matter will be disposed of appropriately and responsibly.

In addition to commendation of our medic for focusing on attending to her patient despite the turmoil, we would also like to publicly acknowledge the Gates Ambulance EMT that stepped up/stepped in to assist her subsequent to detainment of her partner to ensure our patient was treated appropriately and responsibly.

Pending approval by the Gates EMT, we will publicly acknowledge her exemplary behavior in response to a patient and fellow provider in need regardless of the patch on her arm. Thank you both so much for your professionalism in the midst of chaos."

Both supervisors for Monroe Ambulance and RPD responded to the incident. The EMT was released from custody, she was not charged or ticketed.

"The Rochester Police Department prides itself on providing professional and courteous services to our community. On July 11, 2022, a member of the Rochester Police Department and an employee of Monroe Ambulance were involved in an incident at Strong Hospital. Chief Smith was notified of the incident and immediately directed an internal investigation by the Professional Standards Section. Pending the internal investigation, the member involved has been placed on administrative assignment. We ask for patience as we ensure that a thorough and complete investigation is completed."

“I have high expectations for all members of the Rochester Police Department. Obviously, this incident is deeply concerning to me. As a result of this interaction at Strong Hospital, I have directed our Professional Standards Section to initiate an internal investigation. The member involved has been re-assigned to administrative duties, pending the results of this investigation. As Chief, I demand the members of the Rochester Police Department perform their duties in a professional manner. And as such, we must hold ourselves to a high standard of accountability.

Rochester Mayor Malik Evans was asked about the video and said he did not see it but has been in contact with the chief as the investigation continues.

NEW: I just talked with @realmalikevans, he tells me as of 11am, he had not watched the video below but is in contact with the chief and everyone is investigating. @news10nbc pic.twitter.com/dzgsqwzxNX

The City of Rochester Police Accountability Board released the following statement:

"The Police Accountability Board has been made aware of an incident involving a Rochester Police Officer that occurred recently at Strong Hospital. We are in the process of reviewing the information.

Incidents like this, along with the nearly 100 additional reports the PAB received since opening our doors, continue to highlight the need for independent investigations into allegations of police misconduct.

If anyone has additional information about this case, or would like to file a report, please call the PAB hotline at 585-557-2494 to speak with one of our case managers or visit RocPAB.org to file a report online.