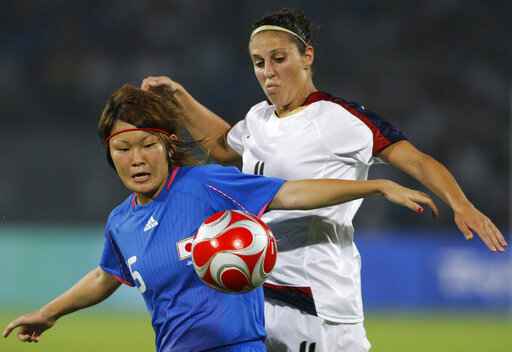 FILE - In this Aug. 18, 2008, file photo, Carli Loyd, right, of the U.S., vies for the ball with Mizuho Sakaguchi, of Japan, during the Beijing 2008 Olympics women semifinals soccer match in Beijing. Older Olympians will be proving that age is just a number in Tokyo. Lloyd is going to be 39 when she plays for the U.S. women's soccer team, but she's not even the oldest soccer player competing this summer. Formiga, who plays for Brazil, is 43. [(AP Photo/Petr David Josek, File)]

(AP) — Carli Lloyd has announced her retirement from soccer. The 39-year-old forward for the U.S. national team had long hinted she would step away from the game following the Tokyo Olympics after a 16-year international career. Lloyd scored a pair of goals in the United States’ 4-3 victory over Australia to win the bronze medal in Japan. Lloyd was the first American to score in four different Olympics, and her 10 total goals in the event set a new record among U.S. players.