Saturday was the funeral for the final victim of the shooting rampage at a Tops Supermarket two weeks ago. Harris went to Buffalo and offered an emotional tribute to her. She also called for action.

Harris stood at the memorial site on Jefferson Avenue for quite some time. She says she’s met with all the families. During the funeral service for Ruth Whitfield, she said the nation is experiencing an epidemic of hate. Holding a bouquet of flowers, Harris and her husband stood in silence, looking at the memorial on Jefferson Avenue. One by one she looked at the photos of the 10 victims who died. A massacre motivated by hate.

"Being targeted, because of who they are, I think we all have to stand back and say, enough is enough,” Harris said.

The last funeral was Ruth Whitfield, 86. She is remembered for her love and compassion for anyone who crossed her path. During the service, inside Mount Olive Baptist Church, Whitfield family members were joined by Harris. 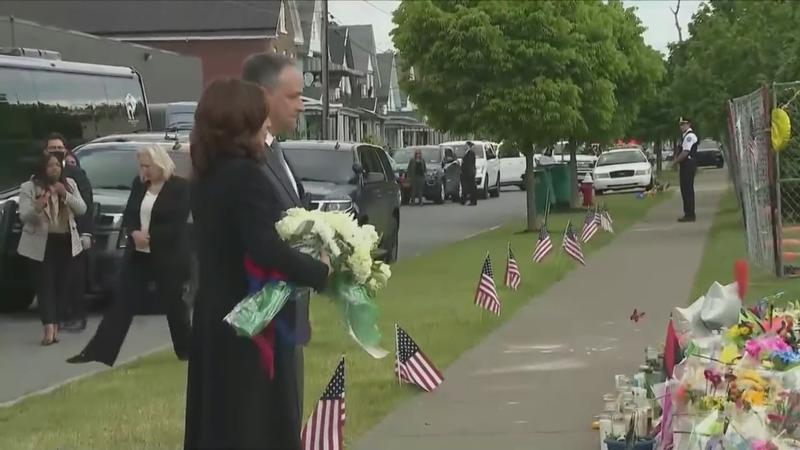 "To the Whitfield family, the father of the Whitfield family, Mr. Whitfield. The pain that this family is feeling right now, and the nine other families here in Buffalo, I cannot even begin to express our collective pain as a nation, to not only lose someone you love but through an extreme act of violence and hate,” Harris said.

Harris got emotional when she was asked "what’s next?" what can we do to stop horrific tragedies like the massacre in buffalo and most recently, Texas, where 19 kids and two teachers were shot to death inside an elementary school.

"I will say, as I’ve said countless times, we are not sitting around waiting to figure out what the solution is, we’re not looking for a vaccine, let’s have an assault weapons ban, you know what an assault weapon is? It was designed for a specific purpose, to kill a lot of human beings quickly. No place for that in a civil society,” Harris added.

The accused Buffalo shooter, Payton Gendron is being held without bail and is charged with first-degree murder.

President Biden will be in Texas Sunday to meet with the families of the Robb Elementary school victims.