ROCHESTER, N.Y. (WHEC) — Rochester Mayor Lovely Warren Monday released more information about what’s being done in the city after the death of Daniel Prude back in March.

His death did not become public until earlier this month.

Daniel Prude was not breathing and had no pulse after he was restrained and handcuffed by RPD officers. He died seven days later in the hospital after being taken off life support. The Monroe County Medical Examiner ruled his death a homicide and says Prude died from complications of asphyxia due to physical restraint, excited delirium and PCP.

Mayor Warren says when the body camera footage was made public, she directed the deputy Mayor to do a full investigation of the incident. 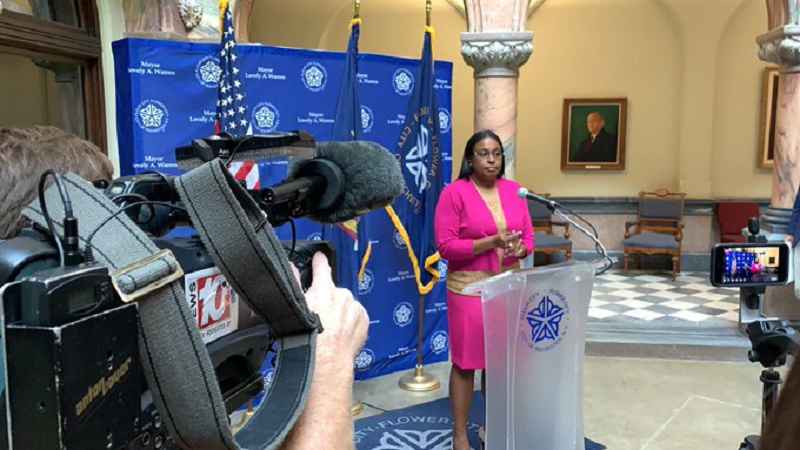 Warren says the review showed Prude’s death, "was not taken as seriously as it should have been by those who reviewed the case throughout city government and at every level." She said the review "showed we have serious work to do in the police department and in City Hall to rebuild the trust within our community, the culture of policing and Rochester must change."

Chief La’Ron Singletary’s last day will be Monday, Sept. 14. Corporation Counsel Tim Curtin and Mayor Warren’s Communications Director, Justin Roj are also being suspended without pay for what Warren said was "failure to act, inform and follow policy and procedures."

The internal investigation shows Roj was first informed of Prude’s death in custody on April 10, and he was presented with at least two opportunities to weigh-in and did not review the body camera footage and notify the mayor of his findings.

Although, a statement Roj released to the media Monday claims, "At no time, before August 4, was I aware of what had happened to Mr. Prude, and when I saw the video I immediately expressed my opinion within City Hall that the officers involved should no longer be on our streets."

Singletary previously announced his retirement, but he was originally going to stay on as Chief until the end of the month.

Warren is also suggesting that the Department of Justice investigate the RPD, including use of force arrests over the last three years, the U.S. Attorney’s Office investigate possible violations of Prude’s civil rights and directing the Office of Public Integrity to begin an investigation to determine if any city employees, including herself, violated city or departmental policies or ethical standards.

The following reforms were also announced:

She says she has apologized to the Prude family and the community for how the incident was handled. She’s also ordered a review of who knew what about the incident and when they knew it.

Protesters have called for Mayor Lovely Warren to resign over the incident. Warren previously admitted to knowing about the video in early August.

"The City Council has a duty to the citizens of Rochester to ensure that an independent investigation is conducted related to the death of Daniel Prude. Within days of hearing of Mr. Prude’s tragic death, the Council engaged Andrew G. Celli, Jr. of Emery, Celli, Brinkerhoff, Abady, Ward & Maazel LLP, to define the scope of an investigation. City Council, by its very nature, must act as a check and balance to the Administration; it is our duty to the citizens of Rochester to ensure that Mr. Celli and his team have the resources needed to conduct an in depth and wholly independent investigation that will result in a report that the Council will make public. The legislation submitted by the Council for tomorrow’s City Council meeting is attached.

With regard to the report issued by Deputy Mayor James Smith, the Council only learned of this investigation, its contents, and subsequent measures proposed by the Mayor when announced at this afternoon’s press conference. While we appreciate the Mayor’s desire to have the City’s Office of Public Integrity look into this matter, we understand the importance of having a review conducted by a separate branch of Government with independent legal counsel. We will review information related to the Deputy Mayor’s report and findings, and share them with Mr. Celli as part of his investigation."

Watch the full press conference in the player below: (mobile users, click here):