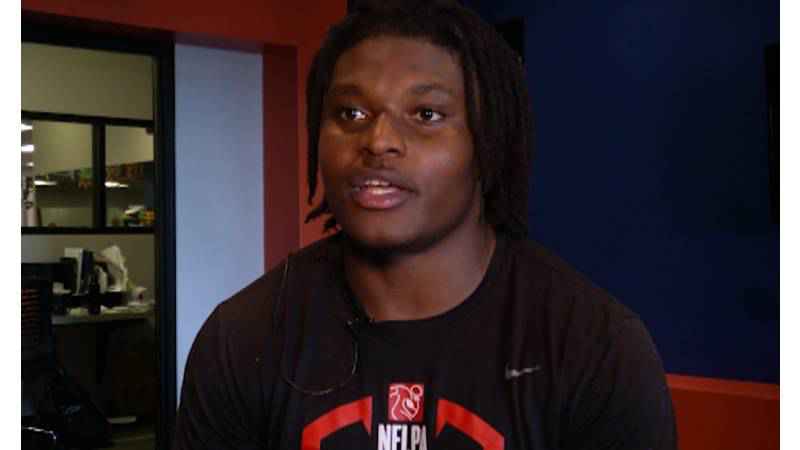 ROCHESTER, N.Y. (WHEC)— A wacky play in the middle of a Thursday Night Football game in Seattle is making the rounds online, and it was due in part to a familiar face in Rochester.

Aquinas Institute grad and current Los Angeles Rams linebacker Jamir Jones broke through the middle of the Seattle Seahawks special teams unit to block a punt off the leg of Seahawks punter Michael Dickson, and that’s where it got interesting.

The heads-up, hands-up play by Jones sent the ball shooting backward towards Seattle’s own 10-yard line, and left Dickson with a tight window to do something with a ball that was very much in play for anyone…. and do something Dickson did.

The Australian-born punter somehow scooped up the still-spinning ball and ran with it briefly before, yes, punting the ball all over again. By the time Dickson launched the ball a second time, Jones was closing in, nearly making a second block.

The punt itself traveled quite the distance, coming to rest around the Rams’ 11-yard line to the tune of a 68-yard punt.

Initially, the refs threw a penalty flag as they thought Dickson may have crossed the line of scrimmage with the second punt, which you can’t do. The flag was eventually picked up, and the punt counted.

The video of the play has been seen by more than one million people on the NFL’s page alone.

While the play did go Seattle’s way, the win ultimately went to Jones and the Rams, as they held on to win 26-17 to improve to 4-1 on the season.

Jones joined the Rams in late September after the team claimed him off waivers from the Pittsburgh Steelers. In the four games he’s appeared in so far this season, he has three solo tackles.

He graduated from Aquinas in 2016. We covered him last year as was working his way into the NFL.

Jones and the Rams next play at the New York Giants on Oct.17.