Winter returns with a vengeance

ROCHESTER, N.Y. (WHEC) — A mild start to Sunday is expected, but the cold will return as early as this evening and settle in early this week. However early today, a warm front will slowly drift east today and transition any wintry mix locally over to rain by the late morning hours.

Heads up on the roadways outside of our region towards Central NY and the Southern Tier as freezing rain is likely through the majority of the day before the transition over to rain in the afternoon. Ice accumulations east of our region will make travel treacherous early as they could see ice accumulations between a tenth and a quarter of an inch. Off towards the west and near buffalo, temperatures are already above freezing and they will remain there for Bills’ fans ride in but bring the extra layers with colder air towards kickoff. Locally, ice accumulations will be minimal with up to a trace possible before the transition over to rain washes it away. Early this morning, temperatures have already made their way over the freezing mark with the exception of areas east of Webster. Those areas will be the ones to watch of slick conditions early before the warm air wins out late this morning. After a mild start to the afternoon, the cold air will make a return and start up the lake effect snow machine later today.

Lake effect snow showers will be possible late today with limited visibility and slick roadways early tonight, but they don’t last too long as a fierce lake effect band gathers intensity late tonight and into Monday morning. Winds will be out of the west late tonight and most of Monday which means the band will be just to our north with the heaviest snow falling north of Syracuse. An arctic front will swing in from the north late Monday evening and switch the winds from the west to the west/northwest and this will swing the band onshore locally and bring us heavy snow around the evening commute and set up lake effect across our region into Tuesday morning. Because of the heavy snow possible Monday evening and Tuesday morning, the First Alert Weather Team has issued a "Yellow Alert" for the region during those times as slick travel and limited visibility is expected. For more information on the lake effect snow expected locally head to the "Yellow Alert update Article" on our website. Along with the lake effect snow, the cold will be another big story. Wind chills will drop near or below zero by Monday morning and they will remain there throughout the day before turning even colder for Tuesday. Temperatures near 0 will be likely early Tuesday morning and wind chills will be near minus 20! Afternoon highs will struggle to reach the 10 degree mark, even with a bit of sun Tuesday afternoon, and wind chills will be near 0. The cold air will not last that long next week as we will begin to warm up on Wednesday with afternoon highs back in the mid 30s Wednesday afternoon. After that, Winter will continue its grip locally and we will be watching a chance for snow once again for MLK weekend. Stick with the first Alert Weather Team for updates on the lake snow, the cold, and another potential for snow next weekend. 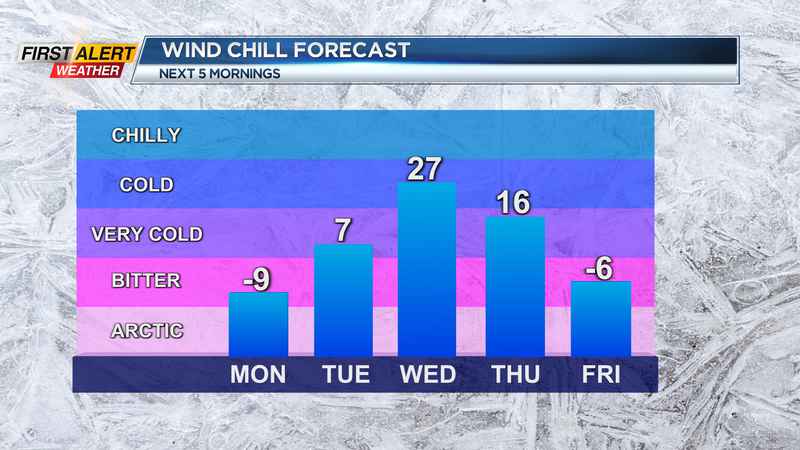