He served as a medic in the 114th General Hospital Unit while supporting a five-person family after his parents died when he was just 17 years old, according to the Greatest Generations Foundation. He then enlisted in the Army and spent three years overseas.

Since 2012, he shared his wartime experience as a global ambassador with the Greatest Generations Foundation.

His daughter, Mary Ann DuPre announced on Facebook that his passing Tuesday was peaceful, and his son was by his side.

“Dad lived an inspiring, incredible life and left an indelible mark on everyone who knew him. He will be sorely missed,” she wrote. 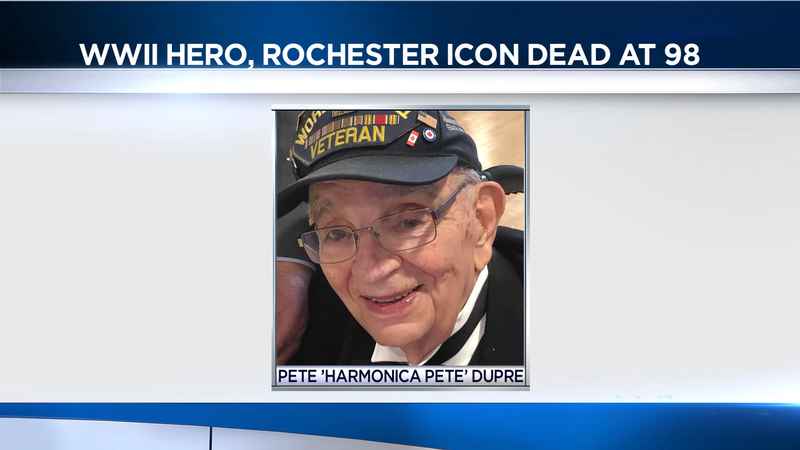 In 2019, his rendition of “The Star Spangled Banner” before a U.S. women’s national soccer team match turned the Fairport native into a viral sensation.

Beloved by the Greater Rochester community, his 97th birthday garnered a large turnout in May of 2020.

Pete DuPre’s kind spirit made an impact on the News10NBC family when he played the harmonica at the funeral for Meteorologist Stacey Pensgen’s grandmother.

Pete DuPre was an amazing man. He played his harmonica at my gramma’s funeral years ago, before I even knew who he was. He introduced himself to me after, and I was instantly a fan. Deepest condolences to his family. https://t.co/zaOY3fbvdK pic.twitter.com/n2g3KWcjOG

News10NBC asked Mary Ann about what his favorite memory performing was.

"His number one favorite memory is being alone on Arizona Memorial in Pearl Harbor and filming by himself ‘America the Beautiful,’" Mary Ann said. "It was a tribute to Pearl Harbor veterans. They were there in 2015."

Mary Ann DuPre, the daughter of Harmonica Pete. She’s holding his hat and one of his harmonicas. Pete DuPre passed away yesterday afternoon. He was 98. @news10nbc pic.twitter.com/uye5s0ep8Q

In lieu of flowers, his family is asking for donations to The Greatest Generations Foundation or Honor Flight Rochester.