BRIGHTON, N.Y. – Congressman Joe Morelle introduced new legislation Wednesday that he thinks could alleviate transportation stress on school districts and help them hire more bus drivers. For most public schools in Monroe County, the first day of school is about three weeks away and many districts are still seeing a significant shortage of bus drivers.

It’s not a new problem, but it’s one that was exacerbated by the Covid-19 pandemic. About a year ago, Congressman Morelle wrote to United States Secretary of Transportation Pete Buttigieg to ask that he allow states to waive one particular requirement for new Commercial Driver’s License holders. It’s the “under the hood” requirement, which means people who want to get a CDL have to prove that they can repair the engine of the vehicle as well as drive it. The problem according to Morelle is that no school bus driver would ever realistically be expected to do that.

“One of the key components that has kept our districts from retaining drivers is the under the hood testing requirement,” said Amy Thomas, executive director of the Monroe County School Board Association.

Back in January after Morelle wrote to him, Buttigieg indeed allowed states to apply to have the “under the hood” requirement waived.

“This waiver was a welcome relief for our school districts, however, the time period expired and many school districts were unable to take advantage of the benefits of the waiver,” said Thomas. 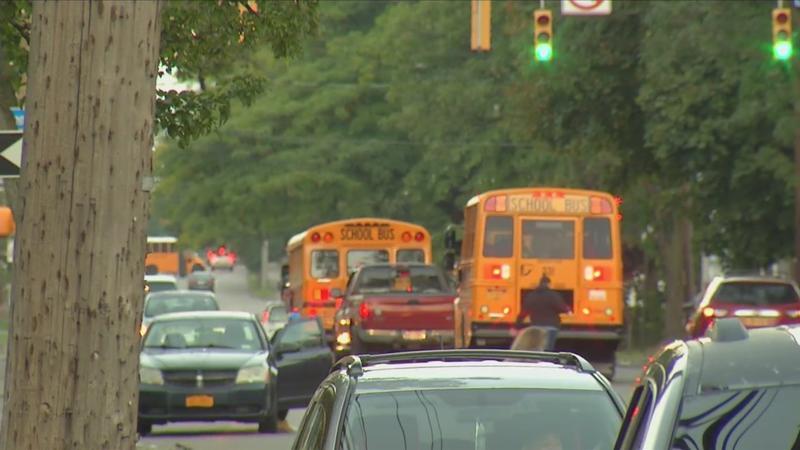 The legislation Morelle introduced this week is called the Get Our Kids To School Act and it would lengthen the waiver so school districts have more time to take advantage of it.

“My legislation would extend the waiver for a year-long period giving states plenty of time to make the change to get more bus drivers in the pipeline,” said Morelle. He was joined at the podium by the Superintendent of the Brighton Central School District, Kevin McGowan.

“We’re currently looking at 14 out of our 45 positions unstaffed,” said McGowan. “I’d like our community to know that certainly will be a challenge as we start the year.”

Brighton is not alone. In Buffalo, the school district is considering offering to pay parents to drive their own children to school. In Greece, there is another school bus driver hiring event Wednesday. The New York State School Bus Contractors Association estimates that our state is 15-20% below full staffing level.

“In order to get a commercial driver’s license, you have to know how to maintain and do repairs on the engines of the busses, something that no school bus driver in the modern age would be asked to do,” said Morelle. “You stay with the children, and maintenance people are brought out.”

“As congressman pointed out, they should be, that driver should be doing what they do best which is working with the children on the bus to provide a safe environment,” said McGowan. “Supervising them, caring for them, that’s where their focus should be.”