Michelle Obama plans 6-city tour for ‘The Light We Carry’

By HILLEL ITALIE The Associated Press 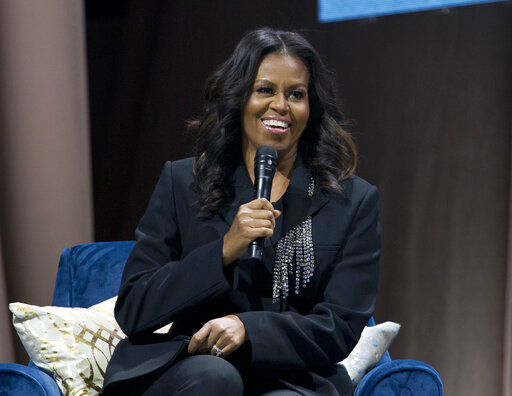 FILE - Former first lady Michelle Obama speaks to the crowd as she presents her anticipated memoir "Becoming" during her book tour stop in Washington, on Nov. 17, 2018. Obama plans a six-city tour this fall in support of her new book, “The Light We Carry: Overcoming in Uncertain Times,” beginning mid-November in Washington. D.C. and ending a month later in Los Angeles. (AP Photo/Jose Luis Magana, File)[ASSOCIATED PRESS/Jose Luis Magana]

NEW YORK (AP) — Michelle Obama plans a six-city tour this fall in support of her new book, “The Light We Carry: Overcoming in Uncertain Times,” beginning mid-November in Washington. D.C. and ending a month later in Los Angeles.

“I’m looking forward to making some new connections — and of course, seeing some familiar faces from the last tour,” the former first lady said in a joint statement Wednesday released through her publisher, Crown, and tour promoter Live Nation.

“This book means so much to me — it’s a collection of perspectives and practices I’ve used to keep me afloat amid uncertainty. On this tour, I’ll be sharing some personal stories and lessons that have helped me along my path, and I can’t wait to tell you more.”

Obama will open at the Warner Theatre in Washington on Nov. 15, the publication date for her book. She will then travel to Philadelphia’s The Met, Atlanta’s Fox Theatre, the Chicago Theatre and San Francisco’s Masonic, before closing at the YouTube Theater in Los Angeles.

The venues have seating capacities ranging roughly from 2,000-6,500. The settings are far bigger than for most book events, but smaller than Obama’s stops on the first leg of her tour for the 2018 memoir “Becoming,” when she appeared at the United Center in Chicago and other arenas holding 15,000 or more. 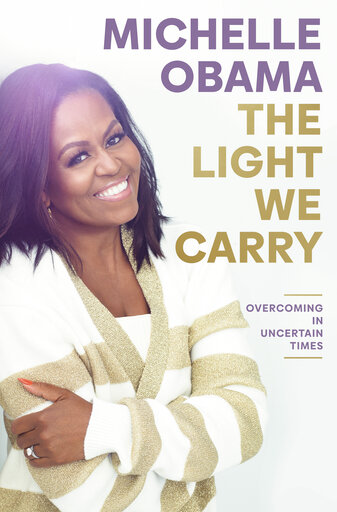 This cover image released by Crown/Penguin Random House shows "The Light We Carry" by Michelle Obama. The former first lady plans a six-city tour this fall in support of her new book, “The Light We Carry: Overcoming in Uncertain Times,” beginning mid-November in Washington. D.C. and ending a month later in Los Angeles. (Crown/PRH via AP)

“Becoming” was a near-instant million seller and went on to sell more than 17 million copies worldwide, making it the most popular book in modern times written by a former White House resident.

As with “Becoming,” Obama will speak at each city with guest moderators, to be announced later. Oprah Winfrey, Tracee Ellis Ross and Sarah Jessica Parker were among those who joined her for “Becoming.” In partnership with Live Nation, Obama will also set aside tickets at each venue for a select number of community members.

Fans can begin registering from Wednesday through Sept. 26 through Ticketmaster’s Verified Fan Platform, https://verifiedfan.ticketmaster.com/michelleobama. Any unsold tickets will be available to the general public starting Sept. 30.