New faces to watch at the 2022 Winter Olympics | WHEC.com

New faces to watch at the 2022 Winter Olympics

Each Olympics introduces a brand new crop of talent to the world, and the 2022 Winter Games will be no different as exciting rookies look to announce their arrivals by winning medals and writing their names into Olympic history alongside the established stars.

Below are some of the notable newcomers from the United States and around the world who are on track to make eagerly anticipated Olympic debuts in February. Past articles have also covered the top U.S. athletes and top international athletes to know ahead of the Winter Games.

One of the biggest risers in the U.S. snowboarding program in recent years has been Dusty Henricksen of Mammoth Lakes, California. Henricksen won slopestyle gold at the 2020 Youth Olympics, then followed it up with a second-place finish at the Burton U.S. Open a month later. Those accolades earned him his first-ever invite to Winter X Games in January 2021, and he promptly surprised the snowboarding world by winning the slopestyle contest. With that win, Henricksen became the first American man to win snowboard slopestyle at X Games since Shaun White in 2009. If the U.S. is to win men's slopestyle at a third straight Olympics, this 18-year-old could be one of the top hopes for making that happen. 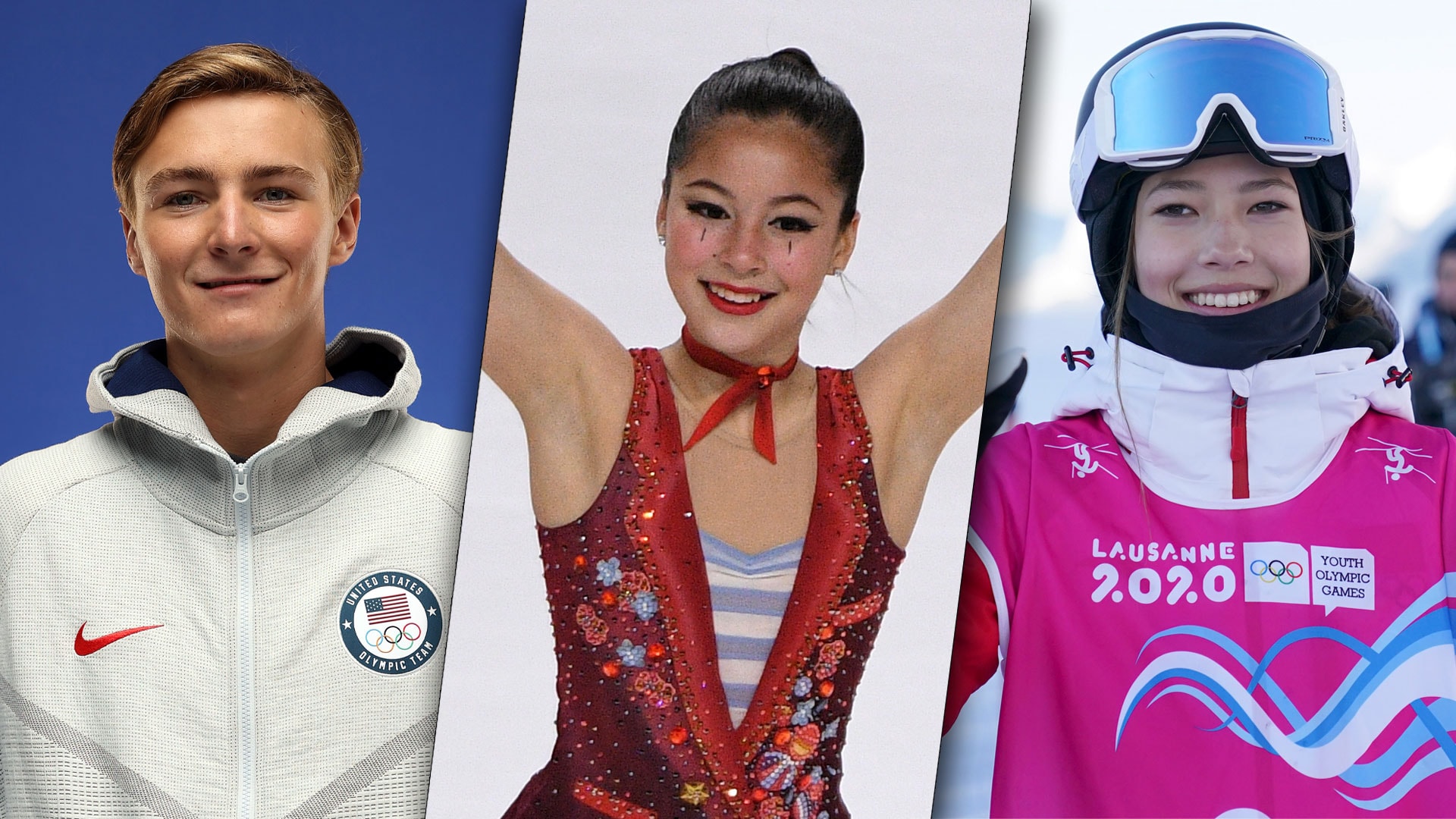 Teenager Kamila Valiyeva drew interest from around the world before she even made her international debut in the 2018-19 season with her short program inspired by the Picasso painting "Girl on a Ball." She won her international debut at a Junior Grand Prix stop in 2019, where she also became the second female skater ever behind fellow Russian Alexandra Trusova to land a quadruple toe loop in competition. She went on to win the 2020 World Junior Championships and took silver at her senior Russian Championships debut. Valiyeva made her senior international debut at the 2021 CS Finlandia Trophy, which she won in world-record fashion, and then won her senior Grand Prix debut at Skate Canada. In November, she recorded the highest scores in history for both the short program and free skate during her win at the Rostelecom Cup.

Since winning back-to-back U.S. national titles in 2019 and 2020 and becoming the country's youngest singles national champion ever, 16-year-old Alysa Liu has emerged as one of Team USA's top women's figure skaters. She's the first junior American ladies' singles skater to complete a triple Axel in international competition and the first American female skater to complete a quad jump in competition. Making her senior international debut in 2021, Liu recorded wins at the Cranberry Cup and two Challenger Series events, and finished fifth and fourth in her two Grand Prix assignments.

After a breakout season that included winning three X Games medals (two gold, one bronze) in one weekend, 18-year-old Eileen Gu's next star turn could come at the Winter Olympics. The freeskiing sensation is one of the sport's rare "triple threats" competing at a high level in all three of halfpipe, slopestyle and big air. Born in San Francisco to an American father and a Chinese mother, Gu attained Chinese citizenship several years ago and will compete for the host nation at these Winter Games, potentially making her one of the biggest stars in and around Beijing.

It's a miracle the 24-year-old's competing at a high level – much less, at all – after a May 2016 crash at age 18 left him with a shattered skull and broken ribs, eye socket, jaw and neck. But through hope and determination, Colby Stevenson returned to his skis just five months later, and less than a half-month after that won a World Cup slopestyle contest in Italy. A rotator cuff injury ultimately spoiled his bid to make the PyeongChang Games, but the New Hampshire-born Park City, Utah, native is now headed to his first Winter Olympics. Stevenson won slopestyle gold at the 2020 X Games, earned silver at the 2021 World Championships, and placed first and second in the last two seasons' World Cup standings.

After collecting medals at X Games and the FIS World Championships in recent years, Colby Stevenson is headed to his first Winter Olympics.
Getty Images

Abby Roque is one of the up-and-comers on Team USA's women's hockey team, and for good reason. The 24-year-old was a standout throughout her collegiate days at the University of Wisconsin, helping to lead her team to a National Championship in 2019. In 155 games as a Badger, Roque logged 56 goals and 170 total points. Her best collegiate season came in 2019-20, when she registered 26 goals and 58 points in just 36 games. A member of the Wahnapitae First Nation, Roque is on track to become the first Native American woman to play hockey at the Winter Olympics. She is currently the only BIPOC (Black, indigenous, and person of color) player on Team USA's women's roster.

After an injury derailed her Olympic dreams in 2018, Kristen Santos is suddenly a rising star for the U.S. short track team. The 27-year-old looks to be in the midst of a breakout season thanks to her hot start to the 2021-22 campaign. In October, she won a 1000m World Cup race, becoming the first American to win an individual World Cup event in seven years. With multiple podium finishes already under her belt this season, Santos could contend in both the 1000m and 1500m events for her Olympic debut.

No athlete with the first name "Winter" has competed at the Winter Olympics, but that looks set to change thanks to American aerials skier Winter Vinecki. The Michigan native, who turns 23 in December, has already accomplished a lot outside of her sport. At age 9, she formed the nonprofit Team Winter to raise money for prostate cancer research in honor of her late father. Before turning 15, she became the youngest person to complete a marathon on all seven continents (including Antarctica). Along the way, she was recruited by three-time Olympian Emily Cook into the world of aerials, and now she's coming off a breakout 2020-21 season in which she won her first-ever World Cup event and finished second behind Australia's Laura Peel in the overall rankings.

Winter Vinecki was one of four Americans to finish in the top 10 of the 2020-21 World Cup standings for women's aerials.
NBC Olympics

He won four golds at his debut senior world championships in 2021, claiming titles in the men's 15km mass start, 20km individual and both relays. Even when taking into account the strange season in which the competition was held, Laegreid's performance remains impressive. The 24-year-old also posted a tremendous World Cup season, placing second overall in standings behind teammate Johannes Thingnes Boe with five victories and eight podiums. He'll have plenty to prove in 2022, but at the very least provides Norway yet another talented skier for future Games.

At 23 years old, two-time junior world champion River Radamus is on target to represent Team USA at his first Winter Olympics in 2022. The Colorado native looks primed for a breakout season, having captured his best career World Cup finish with 6th place in the giant slalom season opener in Austria in October. He's known for unveiling special haircuts each season, and this year was no exception as he showed up to Austria with a "snow leopard" look inspired by two-time Olympian and former U.S. Alpine skier Chad Fleischer.

After finishing out his collegiate Alpine skiing career, American Austin Florian switched over to skeleton. He made the North American Cup in the 2016-17 season and competed in the series again in the 2017-18 season, winning six medals and the silver at U.S. Nationals. That earned him one of five U.S. spots on 2018-19 World Cup circuit. He took eighth in men's singles at the 2019 World Championships, and now, the 27-year-old is leading all American men in the IBSF world rankings and looks poised to make his first Olympic team.

Austin Florian's switch from Alpine skiing to skeleton could lead to his his first Olympic appearance.
Getty Images

Police investigation underway that appears to include 2 areas in Greece