Josh Allen won’t practice on Wednesday because of elbow injury 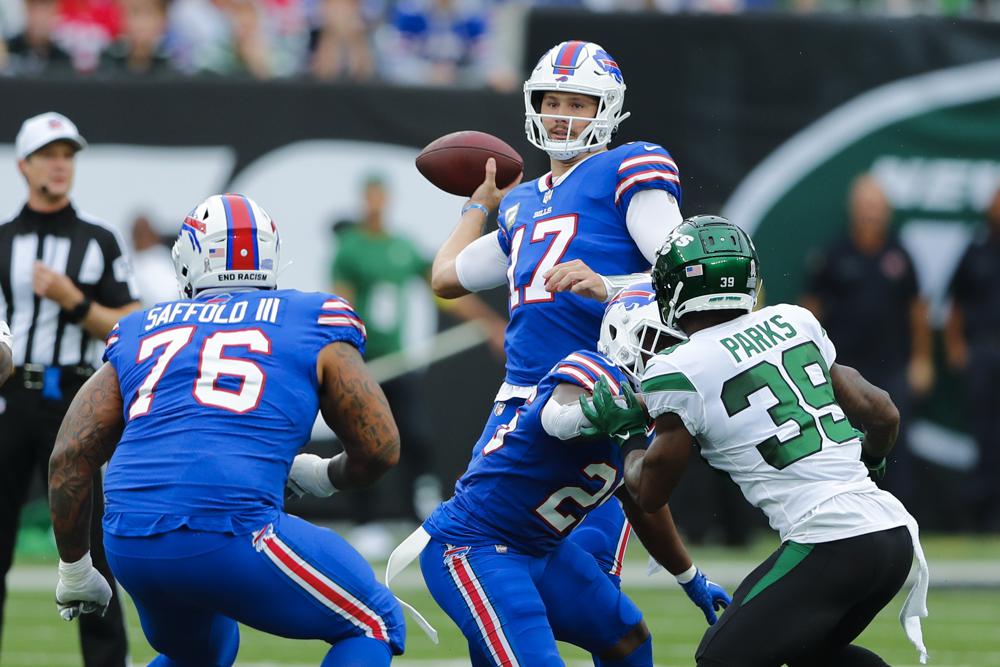 UPDATE: Bills quarterback Josh Allen will not practice on Wednesday because of an elbow injury he suffered during Sunday’s game against the Jets. That’s according to Coach Sean McDermott, who spoke at a Wednesday conference. You can watch the conference here.

McDermott said Allen will be “day-to-day” as the team practices for their Sunday home game against the Minnesota Vikings. According to the NFL Network, Allen’s injury is being characterized as a sprained right elbow.

ORCHARD PARK, N.Y. (AP) — Concerns over the Buffalo Bills’ troubling loss to the New York Jets were quickly overshadowed by even bigger worries regarding the status of Josh Allen’s throwing elbow on Monday.

Suddenly, the entirety of the organization and its fanbase is holding its collective breath while awaiting the results of medical tests to determine the severity of Allen’s injury sustained in the final minutes of a 20-17 loss to the Jets — and what impact it will have on the second half of the season and the franchise’s Super Bowl aspirations.

Allen expressed confidence following the game by saying, “There’s some slight pain, but we’ll get through it.”

A day later, the best words of encouragement coach Sean McDermott could provide was to cite Allen’s competitiveness in saying, “I would never count him out.”

The reality, however, is bracing for the potential of having to turn over a very Allen-centric offense to journeyman backup Case Keenum to keep the AFC-leading Bills (6-2) afloat in the interim.

“He’s been in multiple different systems and he’s seen a lot of ball,” offensive coordinator Ken Dorsey said of the 10-year veteran who has a 29-35 record split over six previous career stops. “So I think there’s some merit to having guys like that in your room that can come in and you’ve got a lot of faith in to step in and operate effectively.”

Trouble is, there are few QBs in the NFL today who can fill the dual-threat cleats of Allen, whose 2,403 yards passing and a team-leading 392 yards rushing, represent 84% of Buffalo’s yards offense.

If worries over the Bills’ self-inflicted mistakes in their loss to the Jets (6-3) didn’t jar open the door in the AFC race, then Allen’s uncertain status has the potential of swinging it even further.

First the good news: Based on tiebreakers, Buffalo still has a direct path to winning the AFC East for a third consecutive year and top spot in the conference for just the fourth time in team history, and first since 1993.

What’s troublesome is Buffalo’s two losses coming against division rivals, including a 21-19 loss at Miami on Sept. 25.

Just as big of a concern is how the Bills’ weaknesses were exposed by the Jets.

The offense generated season-lows in yards (317), first downs (19) and points, with the quarterback having difficulty connecting with any receiver not named Stefon Diggs. Allen also lacked poise and patience by getting sacked five times — the most in two years — while throwing two very ill-advised interceptions.

On defense, the run-stopping issues that were supposed to have been addressed in free agency this spring are again apparent. Buffalo allowed 174 yards rushing, 76 of which came on 13-play, 86-yard drive that ate up just over six minutes of the clock and led to Greg Zuerlein’s go-ahead 28-yard field goal with 1:43 left.

The struggles on both sides of the ball appeared to be a carry-over from the second half of Buffalo’s 27-17 win over Green Bay in which the Packers picked off Allen twice and gained 208 yards rushing in an outing they trailed 24-7 at the half.

In his last six quarters of play, Allen has combined to go 23 of 48 for 294 yards with four interceptions and two TDs rushing.

Complicating his drop in production is a combination of facing stout defenses which have dared Allen to beat them on underneath routes, and Gabe Davis’ inconsistencies in establishing himself as a reliable No. 2 threat opposite Diggs.

Though Davis ranks second on the team with 451 yards receiving, 171 of those came on three catches in a 38-3 win over Pittsburgh. In his past two games, Davis has just four catches on 12 targets for just 68 yards.

It was less than a week ago when Bills general manager Brandon Beane praised the resilience his team showed in overcoming adversity in winning six of its first seven.

Little could Beane have envisioned how much more adversity might still lie ahead.

A running attack that relies plenty on Allen in having topped 100 yards in all eight games this season.

A back to basics series of adjustments on both sides of the ball to counter how opponents have caught up to what made the Bills successful through the first seven games.

S Damar Hamlin. Filling in for injured starter Jordan Poyer, the second-year player had a team-leading 12 tackles and a sack.

Every WR and TE not named Diggs.

DE Greg Rousseau is considered week to week after spraining his ankle against the Jets.

Diggs — and potentially Keenum — prepare to face their former team with the NFC North-leading Minnesota Vikings (7-1) coming to town.