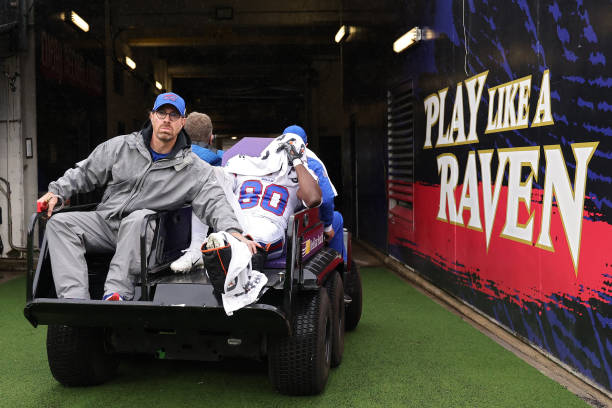 BALTIMORE, MARYLAND - OCTOBER 02: Jamison Crowder #80 of the Buffalo Bills is carted off the field after being injured in the third quarter against the Baltimore Ravens at M&T Bank Stadium on October 02, 2022 in Baltimore, Maryland. (Photo by Patrick Smith/Getty Images)

The injury happened when Crowder was returning a punt. He was carted off the field with his left leg in an air cast.

Buffalo signed Crowder in the offseason, who is in his 8th season in the NFL. He previously played with Washington and the New York Jets.

Crowder’s impact had been slight. Through four weeks, he’d only been able to tally 6 catches for 60 yards. However, he had been a vital part of special teams, returning 9 punts for 100 yards.

That leaves the Bills with Stefon Diggs, Gabe Davis, and rookie Khalil Shakir as the only healthy players on the active roster. Davis himself is still dealing with an injured ankle, but has played through it during weeks 3 and 4.

If Buffalo needs to sign a free agent, there are a few veteran wide receivers with experience in the slot.

Odell Beckham Jr. has been tied to the Bills due to his friendship with Von Miller.