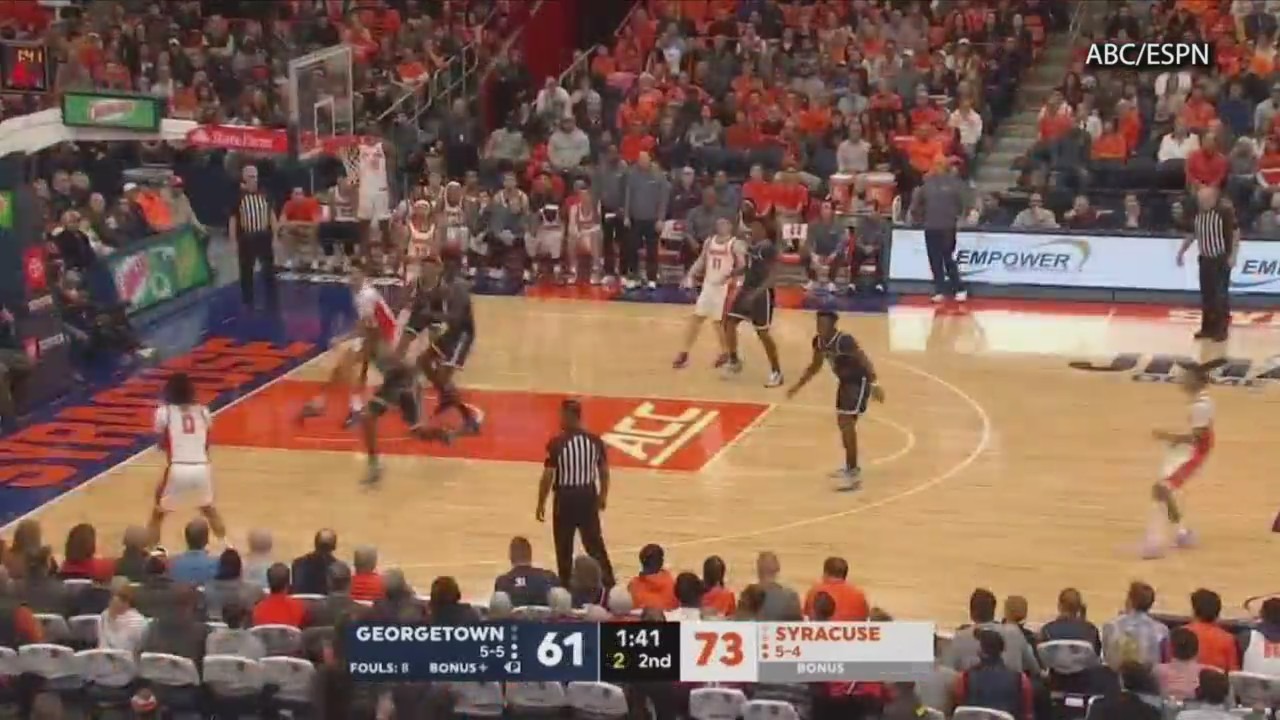 SYRACUSE, N.Y. — It’s been almost a full decade since Syracuse and Georgetown battled it out twice a year in the Big East. But these two programs try to keep the tradition going.

A new page was written from the Dome in Syracuse on Saturday. They beat Georgetown 83-64. Patrick Ewing played some great games against the ‘Cuse. Jim Boeheim was still the coach then.

Benny Williams puts the orange on the board after a 9-0 Hoyas start.

And then they couldn’t stop flushing dunks in the second half. Benny Williams puts one down. And later on with a little more emphasis.

Williams was one of four Syracuse University starters who scored in double figures. 20 assists on 30 made shots. And some applause from the guy running the show, with a bit on the rivalry.

“We played really well,” said Coach Jim Boeheim. “We made a couple bad fouls in the second half that we’ve gotta avoid. but, overall, we did the things you have to do to win. There’s still a certain amount of feeling with Georgetown. That’ll carry on. It’s not obviously what it was, but it’s still Georgetown. It’s still a big game, especially for me. I don’t know about these guys, but for me it is.”

Saturday wasn’t just a game but also an event. At halftime, Boeheim and the late Pearl Washington were inducted into the Syracuse Ring of Honor. The only other names are Jim Brown, Ernie Davis, Floyd Little, and Roy Simmons Jr.

Boeheim coached Pearl when he was at the hill in the mid-1980s and voiced his thoughts on the event and on Washington.

“You know, I don’t think about those things. I didn’t want to do it. But, it was one of those things that had to be done. The way we started, I figured I’d be getting booed at halftime for sure,” Boeheim said.
“From the first day I saw him he was the most exciting player I’ve ever seen and he still is. There’s a lot of better players, but nobody was exciting as Pearl Washington was.”