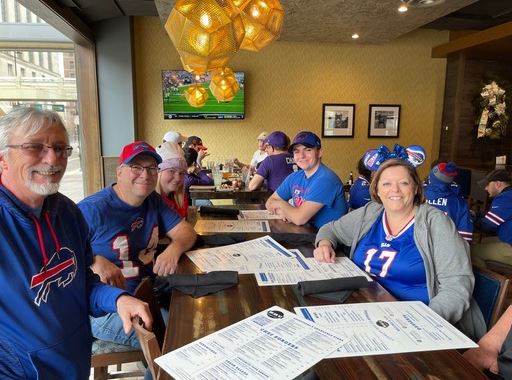 Buffalo Bills fans are in Cincinnati to cheer on the team against the Bengals. (Provided photo)

A big game Monday for Bills Mafia as the team takes on the Cincinnati Bengals as they compete for the top seed in the AFC.

Local fans are out and ready to cheer on the team.

Many started pregaming earlier Monday, excited for their beloved Bills to battle the Bengals.

Jason Fiume lived in Rochester for 10 years. He made the trip this weekend to Ohio with friends.

He says there’s a lot of anxious and nervous energy out there – and that nothing could keep them from attending the game – and hopefully seeing a win.

“After all the things that Buffalo has endured – from the Bills, but also this year with the fatal shooting early in the year, the storm that they’re recovering from, how awesome would it be? I’m getting chills talking about it right now for the Bills to, like, have the playoffs come through Buffalo,” Fiume said.

He says there are a ton of Bills fans swarming Paycor Stadium on a night where a lot is on the line. If the Bills secure the top seed in the conference, they get a bye week in the first round of the playoffs and all games leading up to the Super Bowl will be played in Buffalo.