Bills players give instant reaction after playoff loss to Bengals 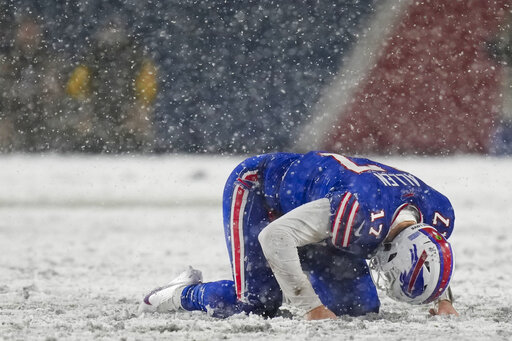 Buffalo Bills quarterback Josh Allen (17) reacts after being sacked by the Cincinnati Bengals during the fourth quarter of an NFL division round football game, Sunday, Jan. 22, 2023, in Orchard Park, N.Y. (AP Photo/Seth Wenig)

ORCHARD PARK, N.Y. (WHEC) – The Super Bowl chase has to wait another year for the Buffalo Bills who lost in the Divisional Round to the Cincinnati Bengals, 27-10.

After the game, players were visibly upset about arguably the worst performance of the season for the Bills. The 10 points was the fewest for the Bills in any game – playoffs or regular season – since a week 13 loss to the New England Patriots in 2021.

For Allen, it was the first time in his playoff career since his debut that he didn’t throw a single touchdown pass.

But Allen and the offense were far from the only problem. The Bills defense gave up 14 quick first quarter points. Although they calmed down as the game wore on, the Bengals still managed top put up 27 points and 412 yards of offense.

“They got into a rhythm pretty quickly offensively and we had a hard time getting them out of that rhythm,” said Sean McDermott.

“There was no real energy, juice, no momentum. Usually we’ll get a stop, offense will score, defense will make a turnover, something to bring some change in momentum. There was none of that this week,” said linebacker Matt Milano.

Despite a lackluster performance in a win or go home game, the Bills remained constant as they had been throughout the year, not making any excuses.

While most NFL teams have their own challenges, the Bills seemed to have more than most teams. On top of an influx of injuries, there were other personal situations that affected everyone. In August, Dawson Knox’s brother, Luke Knox, died unexpectedly. Also during the preseason, former Bills punter Matt Araiza was named in a lawsuit accusing him of gang rape. He was released from the team and in December was not charged.

As the regular season wore on, more things popped up. Star Bills defensive end Von Miller tore his ACL on Thanksgiving and missed the rest of the season. That same game was played in Detroit due to a Buffalo snowstorm. Another Buffalo snowstorm killed 39 people in one of the deadliest snowstorms in United States history.

And then, during the week 17 game at the Cincinnati Bengals, Bills safety Damar Hamlin underwent cardiac arrest on the field. His recovery has been remarkable, but the incident came along with heavy hearts in the Bills locker room. Hamlin was at Sunday’s game, his first time back to watch the Bills play in person since the near-tragedy took place.

Through all of the ups and downs, the Bills were able to stay the course.

“I’m proud of them even though this hurts. Proud of them in the way they handled themselves with class this year,” said McDermott, “But for right now this stings and I wish it was a different result.”

Although excuses were made, there were also goals that fell short of completion. The Bills were preseason betting favorites to win the 2022 Super Bowl.

“Our goal is to win a Super Bowl, a world championship, and we didn’t accomplish that. Everything that happened this season is kind of going void in our minds,” said Allen.