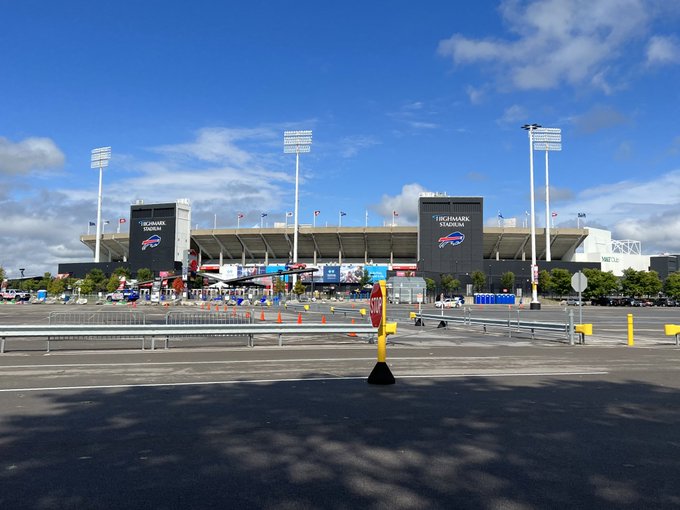 ORCHARD PARK, N.Y. (WHEC) – The Buffalo Bills host the Tennessee Titans at Highmark Stadium. Refresh our game thread throughout for updates and live tweets from Jackson Roberts and Mat Mlodzinski.

Morse has since gone to the locker room.

A long, patient first drive put the Buffalo Bills on the board first, taking a 7-0 lead over the Titans.

Allen went 6-for-8 for 47 yards on the 12-play drive. Number 17 also picked up 10 rushing yards. Devin Singletary had three rushes for 18 yards.

Gilliam broke multiple tackles on his way to the endzone on an 11-yard scamper.

*Update: Mitch Morse has a right elbow injury and is questionable to return.

Titans answer with a touchdown

Tennessee came down the field with an extended drive of their own.

Ryan Tannehill went 4-for-5 for 51 yards and Derrick Henry ran the ball four times for nine yards, with the last carry of the drive a touchdown on 4th & 1 from the 2-yard line.

Instead of kicking a field goal, the Bills decided to go for it on 4th & 1 from the Titans’ 31-yard line. Josh Allen was nearly sacked, and barely got the ball out on time, almost resulting in an interception.

The drive was summed up by plenty of flags on the Titans and a 28-yard completion to Isaiah McKenzie. But then, on 4th & 1, Buffalo tried to draw the Titans offsides. One player jumped, but the refs didn’t call it, and because Buffalo reacted, a false start was called.

Bass was good from 49-yards out.

It was another successful touchdown drive that ends in a touchdown to Stefon Diggs.

Josh Allen went over 200 yards in the game during the drive and for Diggs, it was some history.

Dane Jackson has been injured on a play.

Allen goes deep to Diggs for second TD of the game

For the second straight game, Allen and Diggs connected on a 40-plus yard touchdown. This one put the Bills ahead, 24-7.

The Bills were forced to punt on their previous drive (which doesn’t happen often) and clearly Tennessee wasn’t ready. The Titans muffed a punt, giving the Bills the football in Titans territory.

Buffalo wasn’t able to move it and settled for three.

A Jordan Poyer interception once again put the Bills in position to score.

Zack Moss would rip off a nice run, and Allen finished the drive off with his fourth TD pass of the game and third to Diggs.

Matt Milano picks off Ryan Tannehill for a touchdown

Now the defense is getting involved in the scoring department!

Bills linebacker Matt Milano picked off Tannehill and returned it 43 yards to the house. Buffalo now leads 41 to 7 with 3:49 left in the 3rd quarter.