LIVE UPDATES: Biden warns of ‘substantial loss of life,’ says it may be deadliest storm in Florida history 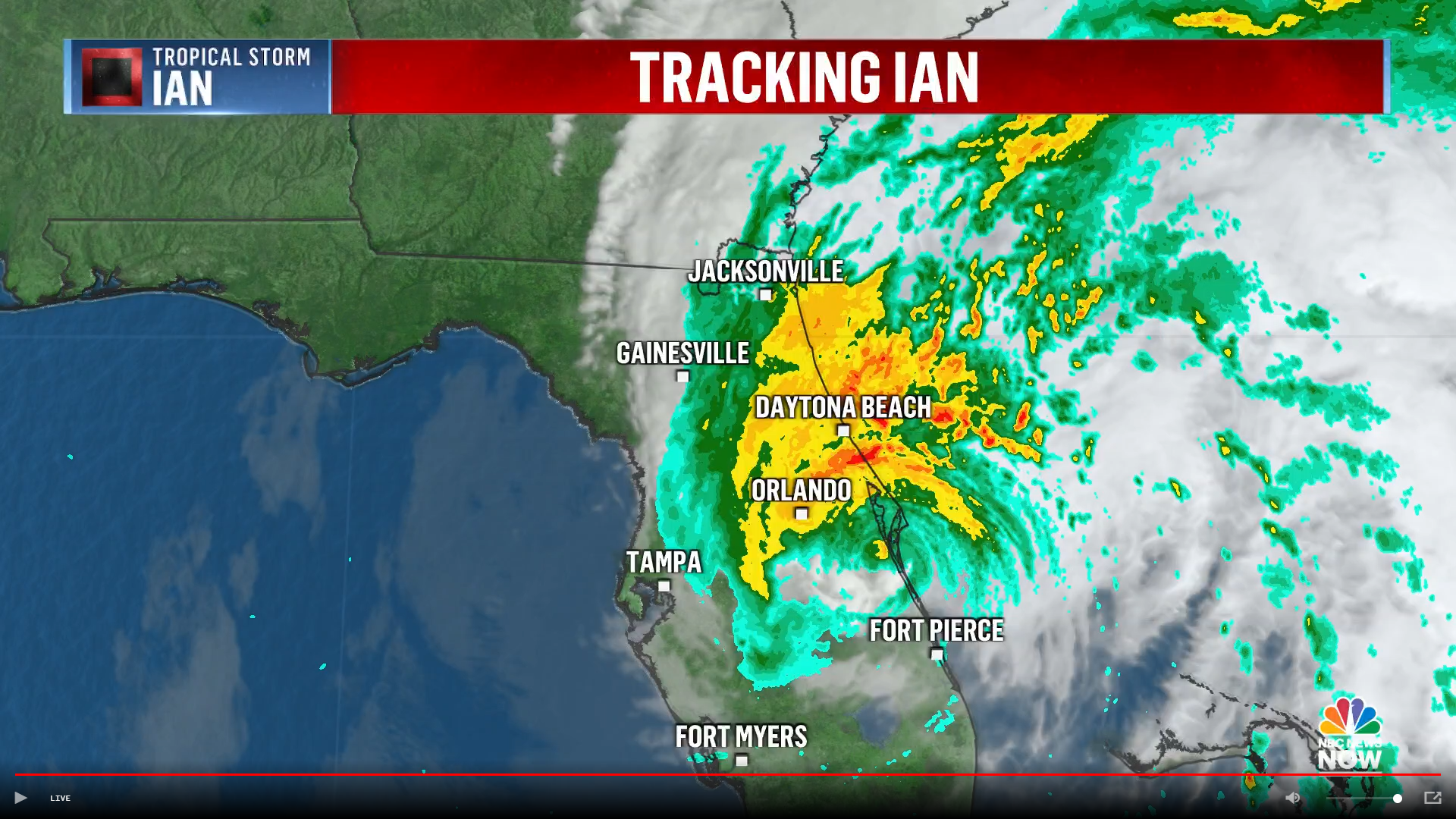 FLORIDA (NBC News) — More than 2.5 million customers across Florida were without power Thursday morning after Hurricane Ian, now a tropical storm, walloped the state as one of the most powerful storms to ever hit the United States, causing widespread devastation and flooding that trapped residents in their homes.

You can see live coverage and updates on NBC News. You can find a link to NOAA’s Interactive Hurricane Tracking Map here.

More than 2.5 million customers across Florida were without power Thursday morning after Hurricane Ian, now a tropical storm, walloped the state as one of the most powerful storms to ever hit the United States, causing widespread devastation and flooding that trapped residents in their homes.

Ian was downgraded to a tropical storm Thursday morning after slamming into Florida’s southwest coast as a major Category 4 hurricane Wednesday afternoon, bringing winds of 150 mph and life-threatening storm surge.

Maximum sustained winds dropped to near 65 mph with higher gusts early Thursday, but the storm has continued to cause destruction as it moves northeast. Its center is expected to move off the east-central coast of Florida later Thursday before approaching the coast of South Carolina on Friday.

President Joe Biden on Thursday declared a major disaster in Florida over the devastation caused by Ian. The president ordered federal aid to supplement state and local recovery efforts in areas affected by the storm starting Sept. 23 and onward, the White House said.

Meanwhile, in Cuba, power is slowly being restored for residents across the country following sweeping outages in Ian’s wake.

President Joe Biden Biden said Hurricane Ian may be responsible for a “substantial loss of life.”

“This could be the deadliest hurricane in Florida history,” Biden said following a briefing with Federal Emergency Management Agency officials.  “Numbers are still unclear, but we’re hearing early reports of what may be substantial loss of life … I spoke with the commissioners and they are worried.”

He said he will travel to Florida to survey the damage from Hurricane Ian and thank first responders once conditions on the ground improve.

Biden said he was also planning to go to Puerto Rico, which was struck by Ian days before the storm made landfall in Florida, and committed to continue providing assistance there.

He said he planned to meet with Gov. Ron DeSantis when he visits Florida. While the two have butted heads politically, Biden said it hasn’t affected their discussions around the storm.

“He complimented me, he thanked me for the immediate response we had, he told me how much he appreciate it, said he was extremely happy with what’s going on,” Biden said when asked about their interactions.

“We’ve given … the governor every single thing he’s asked for in terms of emergency response,” Biden said during the private reception, the transcript of which was released by the White House on Thursday.

As Hurricane Ian becomes what Biden said “may turn out to be the most consequential hurricane they’ve had in a long, long time,” he said he would do “whatever the people of Florida need.” The remarks appear to put aside his stark political differences with DeSantis, a Republican who is seen as a potential presidential candidate in 2024.

But during the rest of the remarks, Biden spoke about how the country is at an “inflection point,” taking direct aim at “MAGA Republicans” on policies such as gun control and climate change. In the speech, Biden did not mention immigration, on which the White House has sparred with DeSantis in recent weeks.

No storm-related deaths in Hillsborough County, but Lee and Charlotte counties ‘may not be so lucky’

Florida Attorney General Ashley Moody said there are no storm-related deaths in Hillsborough County, which includes Tampa, but added that Lee and Charlotte counties “may not be so lucky.”

Officials held a news conference Thursday and thanked the Hillsborough community and its residents for following evacuation orders. “I’ve never seen this community gets so well prepared in over my 30 years of law enforcement experience,” Sheriff Chad Chronister said.

County Administrator Bonnie Wise said that Hurricane Ian’s “last minute move to the east” also spared the region from the worst rain and winds. “Hillsborough County was very fortunate in the final track of Hurricane Ian took,” she said.

Chronister said he spoke with the sheriff in Lee County, who said that they suffered “catastrophic loss and total devastation” and that the death toll is believed to be in the hundreds.

During a news briefing Thursday, Florida Gov. Ron DeSantis said Lee and Charlotte counties are “basically off the grid.”

A large section of a causeway connecting an island in southwestern Florida to the mainland collapsed into the Gulf of Mexico, leaving anyone who did not evacuate stranded, as Hurricane Ian left a path of devastation through the state Wednesday.

Approximately 50 to 65 feet of the Sanibel Causeway collapsed as Hurricane Ian roared through southwest Florida on Wednesday, NBC affiliate WBBH reported Thursday morning, as the destruction left behind by Ian comes into focus.

Ian has made its way through Florida, where the storm has left a trail of extensive damage, but it continues to pummel other states in the U.S.

The National Hurricane Center on Thursday morning has issued hurricane warnings for the entire coast of South Carolina, a tropical storm warning extended to a portion of the North Carolina coast and discontinued the same warning for the Florida coast.

Evacuation orders were lifted in Manatee County, Florida, on Thursday morning and residents were told they could return to their homes, but officials still want people to take precautions.

“This is not an all-clear,” County Administrator Scott Hopes said in a news release. “There are still hazards out there. And you need to understand the danger.”

The mandatory orders had been in place since Tuesday, one day before Hurricane Ian slammed into Florida’s west coast. More than 2.5 million customers across the state were without power as of Thursday morning.

Officials in Manatee County said they have received reports of downed power lines, fallen trees and scattered limbs and that power crews are already working to clean up the areas.

The U.S. Coast Guard has rescued 23 people in Florida and expects that number to climb, Peter Gautier, its deputy commandant, said.

Most of the rescues have been by helicopter, he said during an appearance Wednesday on Fox News. The Coast Guard has boats available and will be “moving to assist in the lifesaving mission” after Hurricane Ian slammed into the state Wednesday, he said.

“The top priority is saving lives,” he said. “In the days leading up to the storm’s landfall, the Coast Guard moved all its cutters, aircraft and small boats out of the area so we could be positioned to bring those back in. That’s happening right now as we speak.”

How Ian compares to Charley

Though Ian was much larger and moving slower Wednesday afternoon when it hit near Cayo Costa, just west of Fort Myers, both hurricanes were Category 4 storms when they came ashore.

Brian McNoldy, a senior research associate at the University of Miami’s Rosenstiel School of Marine, Atmospheric and Earth Science, noted on Twitter that Ian closely followed Charley’s path through the Caribbean, adding that both storms made landfall in western Cuba before slamming into Florida’s Gulf Coast.

But while the two storms share some similarities, experts have said that storm surge, flooding and rainfall intensity from Ian were expected to be more severe.